Before they learned about the Yoba starter culture, Ronald Kyeyune and Ketty Namayanja in Masaka, central Uganda, produced “bongo”, which is traditional Ugandan yoghurt, from 2013 till 2016. “Before, I worked at MADDO Dairies, a big dairy company here in Masaka, but as I didn’t earn enough money I decided to start my own business”, Ronald Kyeyune, dressed in a red checkered shirt, baggy jeans and white boots explains while he is pasteurizing milk in a large metal milk can above an open fire. 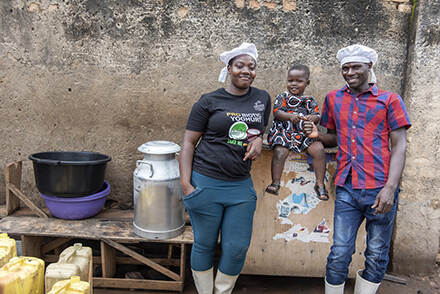 Starting their own business was a but challenging though as they had to learn how to produce yoghurt on a small scale as they obviously didn’t have money to buy such big machines that Ronald earlier used at the big dairy company. A friend explained them how to produce “bongo” while using yoghurt from the supermarket as a starter. But the business was pretty challenging. “Bongo only lasts for two days in the fridge and we even didn’t have a fridge, we could only keep it for a few hours. Therefore we only produced five to ten litres per day, around 40 litres per week, as we had to sell it immediately and also lost a lot of yoghurt that got spoiled”, Ronald explains. At that time, they were not distributing to shops but sold it in the street by bike.

In 2016, the couple came in contact with Nieke Westerik from Yoba for Life who taught them the whole process of making yoghurt with the Yoba starter. “We really liked it directly from the start”, Ketty tells while she sifts the milk that her husband pours into a milk can. “The yoghurt is more thick, has a better taste, is much healthier and lasts three weeks while refrigerated and since we now use a preservative, it even lasts up to a month.”

Of course the couple also encountered numerous challenges. “Lack of capital was the biggest challenge”, Ronald remembers. “As a result, we didn’t have a kitchen for a long time so had to boil the milk outside and when it rained, we couldn’t produce at all. And until October 2016 we didn’t have a fridge so still had to sell everything the same day.” Thankfully, the couple got a 1,2 million UGX loan from a microfinance bank in October 2016 so finally could buy their first fridge. Quickly the couple increased their production. “We started with forty litres a day, then fifty, sixty, hundred and now we sometimes even produce two hundred litres a day, especially in the dry season when people consume more yoghurt”, Ronald tells who adds that with this production of 1,000 litres per week they are now making 300.000 UGX (68 euro) profit per week and sometimes even 400.000 UGX (90 euro). “Business is going very well. We are getting more and more customers.” 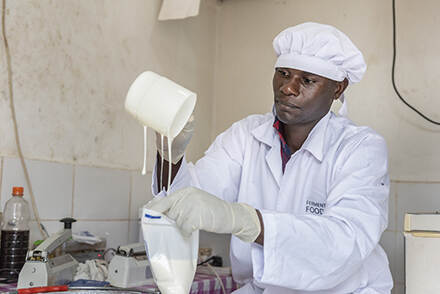 The changing of the seasons is another challenge though. “In the cold/wet season people don’t like to consume much yoghurt because they want to drink something warm like tea so we sell less. And also the prices of the milk fluctuate a lot between the two seasons. In the wet season we pay 1,000 UGX per litre while in the dry season we have to pay 1,500 UGX per litre. That makes it challenging to make a profit and therefor we decided to increase the price of our yoghurt in the dry season a bit”, Ronald explains who sells 500 ml of yoghurt in the wet season for 1,300 UGX (0,29 euro) and in the dry season for 1,400 UGX (0,32 euro).

With a second loan from the microfinance bank the couple bought two motorbikes that they use to transport the yoghurt. “We have eight routes and now sell to two hundred shops and twenty schools where they sell our yoghurt in the canteens.”

Yoba really helped to professionalize the business of the couple, Ronald adds. “They taught us about hygiene, production techniques and marketing. Heifer International gave us nice T-shirts with a text about probiotic yoghurt and after their advice we bought new packaging with the logo of Yoba and the text Dovek Healthy Probiotic Yoghurt on it”, Ronald tells.

The couple also did a lot of marketing. They used motorbike taxis that handed out their yoghurt to people in the street for free and they printed posters with their products and the prices on it. “We pinned these on the door of the shops where we sell because the fridges are not always open so this is how customers found out about our yoghurt. And we also tell customers to go to the shops with these posters on the door.”

If Ronald would be the boss of Yoba, he would do more advertisement by TV and banners in the street to make more people aware of the health benefits of probiotic yoghurt. “Consumers who experience the benefits from the yoghurt, and notice for example that it helps against ulcers, do tell other consumers through mouth on mouth marketing so this helps to increase the sales. But a big national campaign would really help to increase the knowledge of Ugandans about probiotic yoghurt as most people still don’t know what it is.”

With a another loan they got from the Youth Livelihood Fund the couple bought a kitchen and put tiles in their production unit which now is much more hygienic. “We try to invest a lot in our company and are still paying off that loan from the Youth Livelihood Fund”, Ronald tells. The couple got a second fridge as a donation from Heifer International.

Transport is still a challenge though

“Currently in the rainy season all those dirt roads are very muddy which makes is very challenging for our motorbikes to reach many customers”, Ronald tells who explains that the big dairy companies mostly sell in the towns and they being a smaller dairy company currently has a lot of customers in the rural areas which are hard to reach. Therefor the couple soon wants to buy a small refrigerated truck which can easier manoeuvre on muddy dirt roads and is also necessary because of the increase of customers. “The bigger quantities of yoghurt don’t fit anymore on the motorbikes so sometimes a bike has to drive twice the same route to serve all the customers. And some new customers are 46 kilometers from our factory which is very challenging to reach for a motorbike.”

Power is another huge challenge for the couple. “We don’t have a generator so if we experience a power cut, we don’t work that day. Thankfully it’s most of the time only a few hours but we really need to get a generator that can run these fridges, which is very expensive.”

“I’m so excited that we decided to become entrepreneurs”, Ronald concludes. “Earlier we really struggled to make ends meet but now we can provide for our family and even employ three people (plus me and my wife makes five people in total). So this shift has really been life changing for us, for our family and for our workers. My family is doing well, they love the yoghurt and it also helps me to support not only my own family but also to support my mother and grandmother. And it also really helps the schools where earlier the children only ate beans and maize posho so this probiotic yoghurt really improves their diet which helps them to concentrate in the lessons.”

“My friends see me now as a special person. When I started they thought that I wouldn’t succeed because milk in Uganda is a difficult business. Now they are surprised that we run a successful business”, Ronald smiles. “That makes me and my wife really proud.”