Today the European Union and Mexico reached a new agreement on trade, part of a broader, modernised EU-Mexico Global Agreement. Practically all trade in goods between the EU and Mexico will now be duty-free, including in the agricultural sector. Simpler customs procedures will further benefit the EU’s industry, including in sectors like pharmaceuticals, machinery and transport equipment.

The agreement also lays down progressive rules on sustainable development. Among other things, the EU and Mexico have committed to effectively implementing their obligations under the Paris Agreement on climate change. It will also be the first EU trade agreement to tackle corruption in the private and public sectors.

The main elements of the agreement

1) Agricultural exports from the EU are set to benefit the most, such as poultry, cheese, chocolate, pasta, and pork.

The agreement will, in particular:

When it comes to customs procedures, the new agreement will bring in new rules to simplify and speed up paperwork and physical checks at Mexican customs. 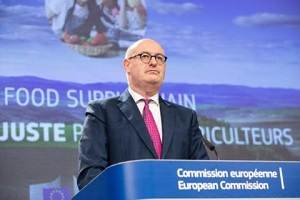 EU-commissaris Phil Hogan: "This agreement proves yet again the value of the EU leading from the front globally in promoting open and rules-based trade."

2) The agreement includes a comprehensive trade and sustainable development chapter, which sets the highest standards of labour, safety, environmental and consumer protection; introduces a new dialogue with civil society in all areas of the agreement, strengthens the EU and Mexico's actions on sustainable development and climate change, notably the obligations both sides undertook under the Paris Agreement on climate change; and maintains and fully safeguards Member States' right to organise public services the way they choose.

The agreement also includes an explicit reference to the precautionary principle that, already enshrined in the EU treaties, allows the EU to keep products out of its market as long as there is no scientific certainty that they are safe.

It will also be the very first EU trade agreement to include provisions to fight corruption, with measures to act against bribery and money laundering. The broader Global Agreement, of which the trade agreement is an integral part, also covers the protection of human rights, as well as chapters on political and development cooperation.

3) The agreement is a big step forward in giving companies mutual access to government contracts in both the EU and Mexico public procurement markets. EU and Mexican companies will be placed on an equal footing, irrespective of whether they present a bid in Mexico or in the EU. Mexico has also committed itself to enter into negotiations with the Mexican States to allow EU firms to tender for contracts at State level by the time the agreement is signed.

4) This opening goes hand in hand with setting a level playing-field: we agreed a high level of protection of intellectual property rights. This protects EU research and development and guarantees fair pay for EU artists, as well as the 340 traditional EU delicacies mentioned above.

5) The new agreement opens up trade in services, such as financial services, transport, e-commerce, and telecommunications. The agreement will also help develop an favourable environment for a knowledge-based economy, with a new chapter on digital trade. This will remove unnecessary barriers to online trade, like charging customs duties when downloading an app, and will put in place clear rules to protect consumers online.

6) On investment protection, the agreement improves investment conditions and includes the EU's new Investment Court System, ensuring transparency and the right of governments to regulate in the public interest, and will also ensure that Mexico and the EU work towards the setting up of a Multilateral Investment Court.

Overall, this agreement will strengthen Europe's leadership in shaping globalisation by putting in place trade rules that are in line with the EU's core values and safeguard the EU's interests and sensitivities. In doing so, it contributes to addressing challenges identified in the reflection paper on Harnessing Globalisation presented by the Commission as part of the White Paper process.

Today's agreement in principle includes the most important elements of the agreement. In some chapters, technical details still need to be tied up. Based on today's agreement in principle, negotiators from both sides will continue their work to resolve the remaining technical issues and finalise the full legal text by the end of the year. Then, the Commission will proceed with the legal verification and translation of the agreement into all official EU languages, and will subsequently submit it for approval by the European Parliament and Council of the European Union.

The trade pillar is part of a broader Global Agreement, which sets the framework for the EU's relationship with Mexico and covers issues of broader shared interest that go beyond trade, including political issues, climate change and human rights.

In 1997, Mexico was the first country in Latin America to sign a Global Agreement with the EU. This came into force in 2000, and will be replaced by the new agreement once it is ratified.