New Minister of Agriculture and Rural Development in Colombia

The increase and sustainability of rural employment, based on a model where there is an expansion of the rural middle class, is one of the main challenges of the new head of the agricultural portfolio. 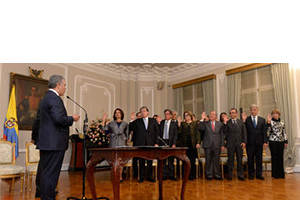 Last 7th of August, after the possession of his position as President of the Republic, Iván Duque, he was authorized to take the oath of his ministerial cabinet, where Andrés Valencia Pinzón, was appointed as the new Minister of Agriculture and Rural Development.

The new Government has indicated that one of its premises in agricultural matters is to give Colombia social justice in the countryside, which has to be reflected in the increase and sustainability of rural employment, based on a model where there an expansion of the middle class rural, micro, small, medium and large rural enterprise is possible.

For that, the purpose is to install a permanent working table with all the stakeholders of the agricultural sector and to have a government close to the regions, in an agenda oriented to work with the farmers and to lead Colombia to become a country that has defeated extreme poverty and generates equity.

The new policy also seeks to take advantage of current open markets and that this leads not only to greater exports, but also to generate more and better formal jobs in the Colombian countryside. Likewise, it has been highlighted that all commercial defense instruments will be used to protect the sensitive products of the agricultural sector.

Andrés Valencia Pinzón is an Economist at the Universidad de los Andes and recently served as president of the National Federation of Poultry Farmers of Colombia (FENAVI).

He was commercial manager of the National Federation of Coffee Growers of Colombia (2011-2013), where he also held the position of Representative for Asia (2008-2010), having responsibility for sales of green coffee and soluble coffee from the National Coffee Fund in the Asian markets.

Between 1993 and 2003 he served at the Ministry of Foreign Trade, being a negotiator and international coordinator (2001-2003) on issues such as the Free Trade Area of the Americas (FTAA). He was also a negotiator of the Colombian delegation at the WTO, in Geneva, Switzerland, and advisor to the Superior Council of Foreign Trade.

Several associations have celebrated the arrival of Minister Valencia to the agriculture portfolio. The Sociedad de Agricultores de Colombia - SAC (largest association of the sector), for example, said that "it is the ideal person to lead the transformation required by the Colombian countryside for the next years based on its technical and managerial knowledge".