Indonesia is Opening a Food Estate in Central Kalimantan Province

In anticipation of food scarcity, the government of Indonesia is inventing in a ‘food estate’ development program that expectantly becomes a new food granary outside Java island. Led by the Ministry of Public Works and Housing (PUPR), Indonesia invited inputs particularly from Water Resources Professionals to build better irrigation in the future for a robust Food Estate Design.

Food estate is an integrated food development concept that includes inter alia agriculture, plantation, animal husbandry in one area. The planned location for the new food barn is in Pulang Pisau Regency, Central Kalimantan Province. The government claims that there is a conceivably 165,000 hectares land area,​​ which is an alluvial soil and not peat, on the ex-Peatland Development (PLG) land in Central Kalimantan. 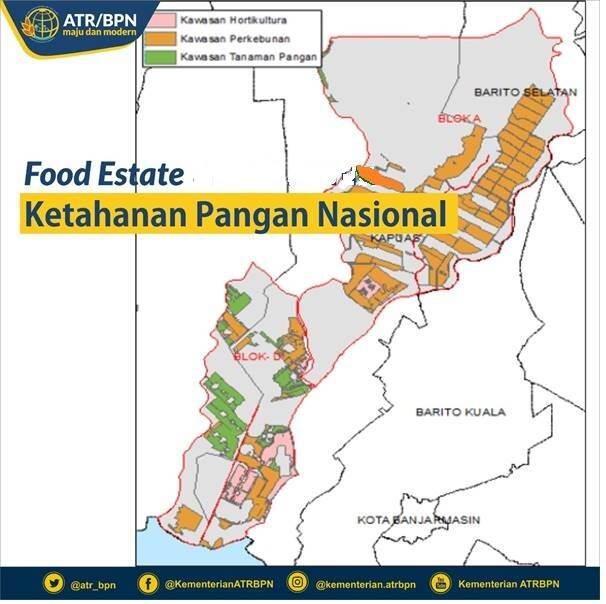 The Food Estate will become one of the National Strategic Programs (NSP) 2020-2024. The development work will kick start in 2020 until 2022, when the whole ​​165,000 hectares land area will be optimized completely for food production. This program is the second priority after the development of five National Tourism Strategic Areas (KSPN).

Next to rehabilitating the irrigation, the government is currently preparing the food estate office complex and pier. In the meantime PUPR has completed the construction of Tumbang Samba bridge that connects villages in Central Katingan District, Central Kalimantan Province. The bridge will not only open the isolated area in North Katingan and to complete the structure of the national road network from Central Kalimantan to West Kalimantan and vice versa; it will also support increased connectivity to the location of food estate development. The bridge with a total length of 843.2 meters will be the longest in the Province and equipped with connecting bridges and roads on both sides. The Tumbang Samba bridge will serve as an alternative to ferry services on Katingan River.

From the Indonesian government, having a food estate will provide many direct or indirect benefits, such as to increase the added value of the local agricultural production, increase the absorption of agricultural labor up to 34.4%, with a solid logistic scheme it will lower food prices while abundant production, and open the potential for food exports to other countries.