The Mekong Delta province of Kien Giang plans to increase the area under industrial and semi-industrial shrimp farming models to 3,200ha and annual output to 28,000 tonnes this year, according to its Department of Agriculture and Rural Development. 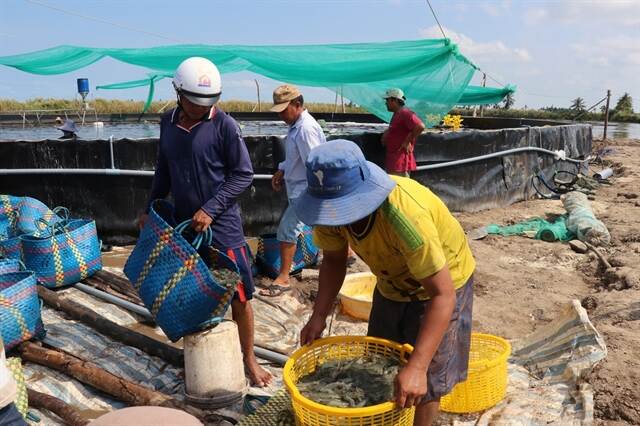 Quang Trong Thao, deputy director of the department, said to ensure safe, sustainable and efficient shrimp farming, the province would carefully monitor the farming environment and outbreak of diseases to promptly address problems.

The province, one of the delta’s largest shrimp producers, is setting up 44 sites to demonstrate the industrial and semi-industrial shrimp farming models. Farmers can visit them to learn how to practice the models.

The province will also teach farmers shrimp farming techniques that use advanced technologies and water efficiently and Vietnamese good agricultural practices (VietGAP) standards, according to the department.

It will act as a link for shrimp farmers to tie up with companies to ensure they can sell their output and invest in infrastructure required for industrial and semi-industrial shrimp farming.

It will instal a three-phase power supply system in Kien Luong, An Bien and An Minh districts to meet the requirements of industrial and semi-industrial shrimp farmers.

Ha Tien City will dredge irrigation canals to ensure there is adequate water supply for aquaculture.

Farmers in the province have so far harvested 700ha of industrial and semi-industrial shrimp this year, producing 3,632 tonnes.

Last year they had produced more than 24,800 tonnes on 2,850ha, including more than 950ha under the two-stage industrial farming model.

Under the model, juvenile shrimp are raised in a nursery pond for a few weeks in the first phase and then transferred to a main pond for breeding.

The pond beds are covered with plastic sheets and nets are hung above to keep out sunlight. Ponds are also equipped with oxygenation facilities.

In Hon Đat District’s Tho Son Commune, many farmers have successfully adopted it.

Mai Văn Nhường of Tho Son’s Hon Queo Hamlet was one of first, having tried it during the last shrimp crop.

The model is efficient since the shrimp contract few diseases and require less tending than in traditional models, he said.

“Thanks to modern facilities, farmers can easily manage the environment.”

Vo Thanh Binh of the Tho Son Commune Economy - Agricultural Technique Division said traditional methods require a lot of time and labour to renovate ponds after each crop.

Farmers cannot manage food residues and other waste in their shrimp ponds and the animals are easily affected by diseases whereas under the two-stage industrial shrimp farming model they can actively manage these problems and improve the shrimp survival rate, he added