The Vietnam Private Sector Economic Forum 2019 opened in Hanoi on May 2 in Ha Noi with the participation of Party, Government and legislature leaders, academia, and business representatives. The main topics of the Forum this year were agriculture, digital economy, tourism and the expansion of mid- and long-term capital flows. 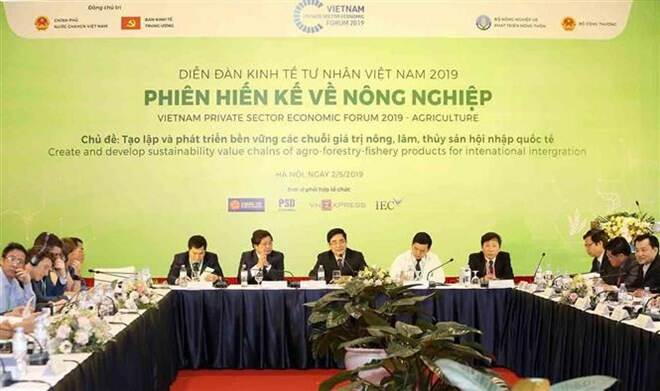 In his speech at the plenary session, Prime Minister Nguyen Xuan Phuc stated  that after more than 30 years of economic reform, Vietnam has achieved significant results, in which the private sector has emerged as a driving force and makes up 40% of the country’s GDP, however, private sector still faces many difficulties thus we need to create more favorable conditions, including fair opportunities and access to resources for the development of the private sector.

During the first day of the Forum, a special conference was organized, focusing on the sustainable formation and development of agro-forestry-fishery value chains for international integration. The conference attracted nearly 300 Vietnamese and foreign delegates. It took place when agriculture remains the major supply source of food despite the sector’s reducing contributions to the GDP from nearly 40% in the 1990s to less than 15% by the end of 2018.

According to Mr. Cao Duc Phat, deputy head of the Central Party’s Economic Commission, the forum aims to find out measures to strengthen connectivity to develop value chains for strong farm produce of Vietnam, and promote investment in agriculture and rural areas amidst international integration. Among the 500,000 operating enterprises, only 6,000 work in agriculture. Apart from that, Vietnam has 10 million farmer households with small and micro production scales.

Meanwhile, Le Quoc Doanh, Deputy Minister of Agriculture and Rural Development, added that the total agro export values reached US$261.28 billion in the 2008-2017 period, up 9.24%/year and more than US$40 billion last year, ranking 2nd in Southeast Asia and 15th in the world. Vietnamese farm products are now available in 185 countries and territories. However, said Viet Nam still faces with many long-lasting difficulties, including low competitiveness due to limited quality of agricultural products.  He stressed the need to develop high-quality and environmentally-friendly products to sharpen competitiveness of farm produce in the global value chain.

Vice President of the Vietnam Cooperative Alliance Nguyen Van Thinh said that it is crucial to amend the 2012 Law on Cooperatives and the Land Law to solve the problems in land accumulation/ consolidation, while building models for cooperatives in associated with key products of each locality. Cooperatives themselves should reform and improve their capacity to meet integration requirements.

The forum will offer the private sector an opportunity to make recommendations and talk directly to policy makers. They can also propose initiatives to promote the private sector's contribution. It is surely an important channel for Government agencies and ministries to identify bottlenecks restricting the development of the private sector and listen to recommendations from the business community. But how to make Vietnamese private enterprises grow strongly and sustainably remains an issue that cannot be addressed by just a two-day forum.