'Thanks to the yoghurt, we are now self sustainable'

“Earlier we produced traditional yoghurt on family level”, Jean Mukumuza (56) from the Kashaka Women Entrepreneurs Group in Rwempongo Kashaka region in Uganda tells. “But after we met Nieke Westerik from Yoba for Life, we realized that it would be much better to form a women group so we could start with producing more yoghurt and do it on a commercial scale. This has helped us very much. We don’t longer depend on our husbands and we are now self sustainable.” “It also helps our families. We can take our children to school and we now can pay for our basic needs. And our children used to cough and have diarrhoea but since they consume the probiotic yoghurt, their health really improved.”

The women group started with producing twenty litres per week in December 2015. “At that time we didn’t have any shelter so we just produced under a tree and when it was raining, we couldn’t produce”, Jean tells. In the following years, the women increased the production volumes and now they produce three hundred litres per week

“The market is still a challenge though”, Jean tells. “People didn’t know anything about probiotic yoghurt and didn’t see any difference between their cheaper, home made yoghurt, which is not pasteurized. And even now still some people don’t understand why they should buy our yoghurt and why we bring a foreign starter when in this region we already had our own traditional yoghurt. So it takes a lot of effort to explain the differences to them”, the mother of two children tells.

“Ourselves, we do see a big difference”, Jean adds. “The yoghurt is more thick and when malnourished children, elderly people and HIV-patients consume our yoghurt, their health really improves.” 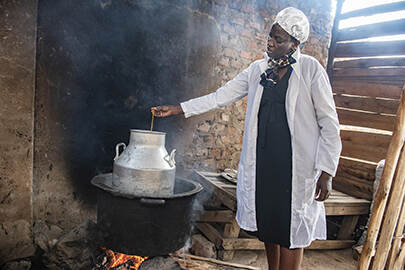 The women group would like to set up a training centre to also teach other women how to produce probiotic yoghurt. “And our dream is to put up a factory with a big pasteurizer and other machines so we can start producing not only yoghurt but also icea cream, cheese, butter and also start a bakery so we can produce cakes because people in Uganda really like to consume yoghurt together with cake”, Jean tells who adds that this would all create job opportunities for women an youth. “And we also want to target hospitals, clinics and orphanages as for them, the yoghurt is also extra healthy.”