Spain: Exporters report the collapse of several ports by the COVID-19 The Coronavirus crisis has led to a disruption in world production. First the factories in China and later in Europe stopped. However, all have been affected, to a greater or lesser extent. Spain is no exception and the pandemic has even broken the shipping chains. Exporters have been reporting for some time that several Spanish ports have collapsed and are unable to make their shipments mainly to Asia, but also to Latin America. Wanting to export and not being able to, with the consequent economic cost that this has for companies.

On the route through Spain to Asia, before the Coronavirus, shipping companies' alliances chartered two large ships per week, four every two weeks. These last months they have reduced that amount to only two per fortnight. Four ships a month to carry all the goods to the Orient. This, according to the exporters consulted, is a serious problem for exports since, with less capacity, the possibilities are reduced.

The same exporters complain that their goods are taking more than a month to be able to leave the Spanish port to their destination, when previously it took just a few days. They suggest that the alliances are prioritizing the clearance of perishable goods and are delaying many others that do not have an "expiry date", so to speak.

Beyond the collapse in transport due to the lack of ships, all the sources consulted highlight that prices have even risen by more than 60% with respect to the pre-COVID period.

The shipping companies acknowledge the existence of this problem in Spanish ports and in other countries. They blame the pandemic: if there is less production and less export demand, they cannot charter as many ships. Maersk, one of the leading companies in the sector, points out that it has 20% less volume than before the crisis.

Less activity in all major ports

However, the sources consulted by ABC reflect that this is not a generalized problem in all Spanish ports. This situation is occurring mainly in Valencia, Barcelona and Algeciras. 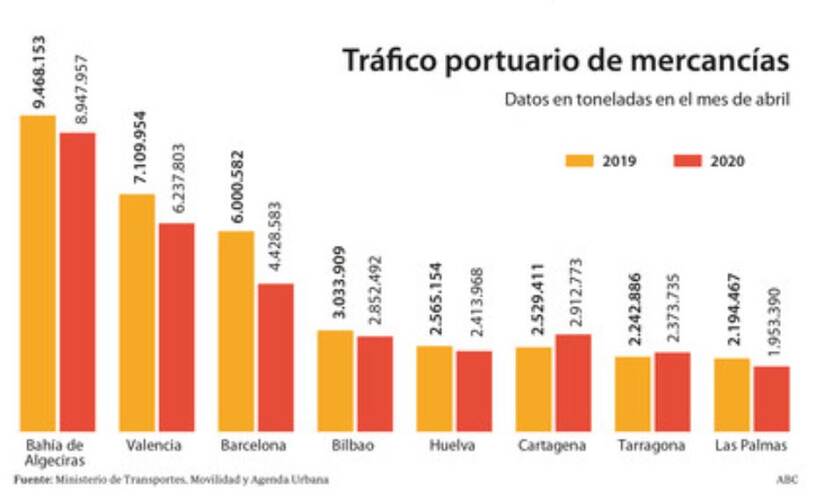