(Vietnam net) - As catfish export has been on the decline in recent years due to a rise in trade protectionism in large traditional markets such as the US, Vietnamese firms are looking to bring the fish back home. 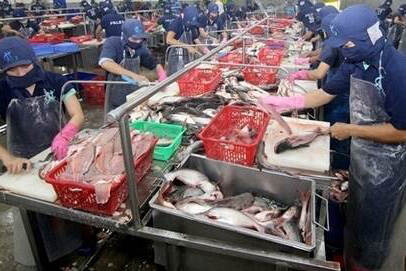 Catfish processing for export at a firm in Dong Thap province

“We have been focused on catfish export for the longest time. Only until recently when we have had to deal with difficult trade barriers and tumbling price that we started to look back and attempted to bring the fish to the domestic market,” said Pham Minh Thien, director-general of seafood processor and exporter Co May Imexco Jsc in the Mekong province of Dong Thap.

Thien said bringing the fish to domestic consumers is both a responsibility for Vietnamese fish farmers and an opportunity for the industry to become sustainable in the future.

According to the Vietnam Association of Seafood Exporters and Producers (VASEP), catfish export during 2019 has fallen to just over US$2 billion, an 11.7 per cent decrease compared to the previous year.

Among Vietnamese catfish export markets, the US, traditionally one of the largest buyers, has seen the biggest fall in demand. Tra fish export to the US in 2019 reached just over $280 million, a dismal figure compared to $560 million just a year before, with price dropped by 30-35 per cent since 2018. In addition, bumper harvests in the last two years have resulted in a surplus in supply, which drove catfish price down in recent months.

By the end of 2019, the US accounted for just 14 per cent of Viet Nam’s total catfish export, falling far behind China (32 per cent). Furthermore, the situation is likely to get worse as anti-dumping tariff remains high making it difficult for the Vietnamese fish to enter to the US market, said Nguyen Hoai Nam, VASEP deputy secretary-general.

Speaking at an event to introduce dishes made from catfish to consumers in HCM City, deputy director-general of Saigon Food Le Thi Thanh Lam said the quality of catfish is beyond question and firms should find ways to bring the product to the domestic market.

While tra fish have proven its popularity and met with strict standards in foreign markets, Vietnamese consumers have yet warmed up to the fish due to a misconception that industrial style fish farming produced less-than-desirable quality and may be unsafe to consume.

Industry experts, however, have pointed out that strict regulations and rigorously enforced safety procedures that shelter the fish from pollution sources, in fact, ensure that the fish is much safer to consume even compared against fish found in the natural environment.

In 2019, Vietnamese catfish has been certified by the US Department of Agriculture to have met all US safety standards.