The 2019-2020 season in Almería is already underway, several weeks ahead of its usual dates. The horticultural sector is facing finantial trouble and needs to generate revenue as soon as possible. 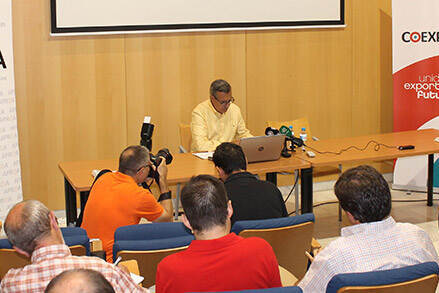 Although the first produce will not go on sale until beginning of October, the aim of bringing the harvest forward by some weeks is to start generating revenue as soon as possible. Luis M. Fernández, Manager of Coexphal -the fruit and vegetable POs’ organization from Almería- pointed out that the previous season ended with a new drop in farmers’ profitability. “With a profit account below minimum levels, it is necessary to invest again in the new season because the farmer needs to generate income as soon as possible, in order not to continue increasing his current level of indebtedness”.

In some cases, planting were advanced to the beginning of July, even to the end of June, as was the case of California peppers. At the end of August, practically all the peppers to be grown in Almería this season had been sown.

The seed companies and the farmers recognize that peppers will the leading produce of the season, beginning, “with an increase in production area of 8-10%”.

Once again, tomato will be the product with the smallest growth, especially loose tomato and cherry tomato, with a crop reduction of around 10%.

This decrease, in the case of loose tomatoes, is produced because of the increasing Moroccan competition and prices have suffered in the last two to three years; in the case of cherry tomato, because labor costs are significantly higher than those of other varieties are.

Seed companies point out that, in terms of seedlings’ overall volume, there will be no major differences with respect to the previous season, because there is no appreciable increase in cultivated areas.

On the other hand, the sectorial organization Anove estimates that the current season there would be just over a billion seedlings for the fruit and vegetable sector coming from the seedbeds operating in Almería.

The interbrach organization Hortyfruta (Fig. 1) has proposed that this be the biological control year with its campaign, “I love Bichos” (I love bugs). 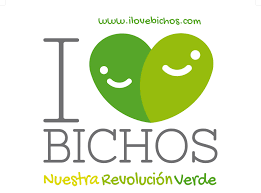 In mid-July, the Manager of Coexphal presented the assessment of the last season to the press (Fig. 2). He pointed out that “this season has ended leaving a bad taste in my mouth mainly because it has produced very bad results in the spring period. If we evaluate the campaign as a whole, we can say it is an acceptable one”. 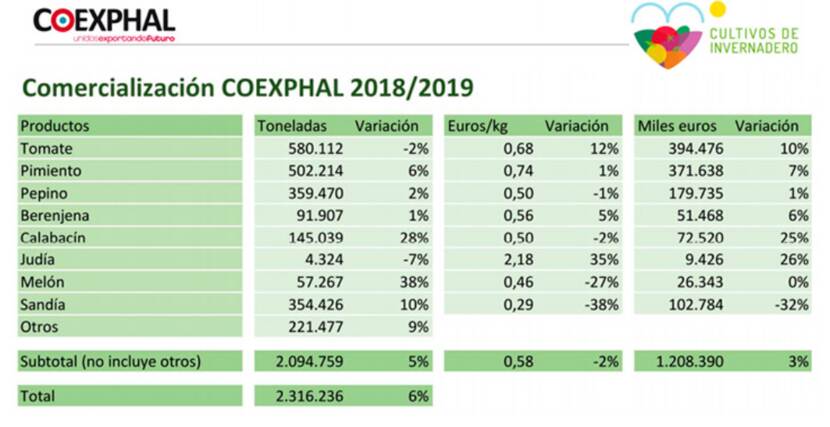 In particular, bad prices were seen in melon and watermelon, which fell by 30%, the same percentage that decreased income in both crops, despite the 40% increase in production regarding melon and 10% in watermelon.

In general terms, prices, although they fell by 2%, were offset by production, which increased by 5% and, as a result, the income also grew by 3%.

Peppers were the most reliable, maintaining a stable price and improving production by 6%.

Aubergine’s prices increased by 5% and its production almost did not vary.

The courgette stood out for a strong increase in production (+28%).

The cultivation of tomatoes, historically the main produce of the Almería’s greenhouses, has been erratically performing for years. Last season it managed to improve its prices by 12%, although with a 2% lower production. For Fernández this is worrying because in recent years there seems to be a transfer to other crops. It should be remembered that this vegetable is the one under the strongest competition and where persisting problems related to Tuta absoluta.

Is the Almería horticultural model being exhausted?

L.M. Fernández warned that Almería’s greenhouses are increasingly showing narrow margins, with prices stagnating over the last 20 years and simultaneously a steady increase in production costs.

The only thing, in his opinion, that has managed to solve the situation the sector has been suffering for years, is producing more kilos. By increasing the production volume, the sector has survived the asphyxia caused by the increasing labor costs; this could be worsen by the rise of the national minimum wage since January 1, 2019, as well as the competition from other countries, mainly due to the boom in Morocco and stability of the Netherlands.

Coexphal’s Manager showed how Almería has lost market share in the EU tomato exports over the last decade (Fig. 3). Almería exports 15% of total EU demand, the same figure as Morocco, which has doubled its share, while the Netherlands maintains its hegemony at 31%. 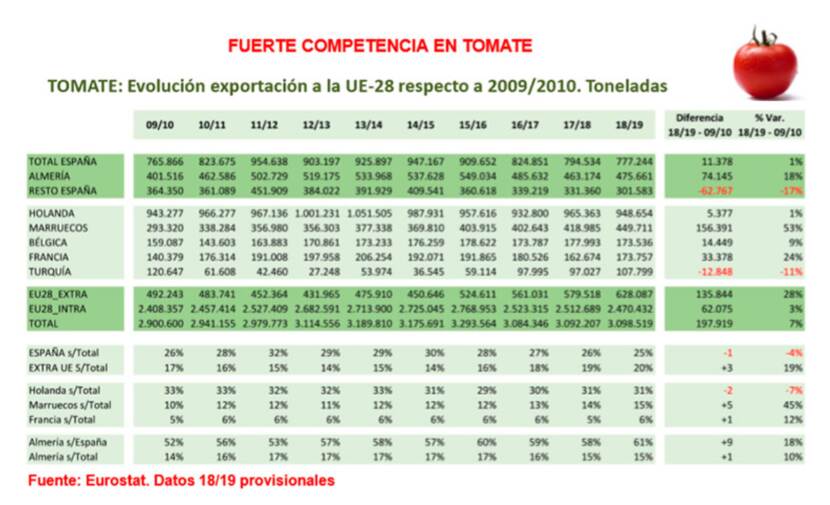 Fig. 3. Evolution of tomato exports to the EU

Is there any solution for Almería?

Considering that, according to Fernández, labor costs of Almería horticulture accounts for 45% of total expenditure per kilo produced,  we must first consider that there are crops needing more workforce such as cherry tomatoes, while others, such as peppers, can be handled with a quarter of human resources.

In addition, he pointed out “there is room for improvement, more kilos can be produced per square meter, thanks to the available tools, digitalization and robotics; we have to be more efficient, adjust the varieties we grow, achieving more flavor, offer what the market demands, continue growing quality and food security”.

“Almería’s horticulture has faced multiple challenges throughout its history and has always known how to move forward”, he concluded.