A Lookback on a very fruitful Chongming & Taizhou Horticulture Roadshow

Earlier this month, the Consulate General of the Kingdom of the Netherlands in Shanghai and the Dutch Business Support Office in Nanjing successfully hosted the ‘Chongming & Taizhou Horticulture Roadshow’ in Jiangsu province. The main purpose of the roadshow was to promote the Dutch know-how on protected horticulture in China. At the same time, it facilitated a handful of Dutch companies to show their achievements in the rapidly developing Chinese horticulture sector.

The two-day Roadshow that took place on September 5th and 6th was led by Deputy Consul General Ms. Jalink. In total, a delegation of twenty-two* Dutch companies accompanied her on her mission to strengthen local Sino-Dutch horti-cluster relations, making it the biggest horticulture roadshow in participants in Sino-Dutch history.  The attending companies represented all different areas in the horticulture chain and included companies active in both the Netherlands and China. 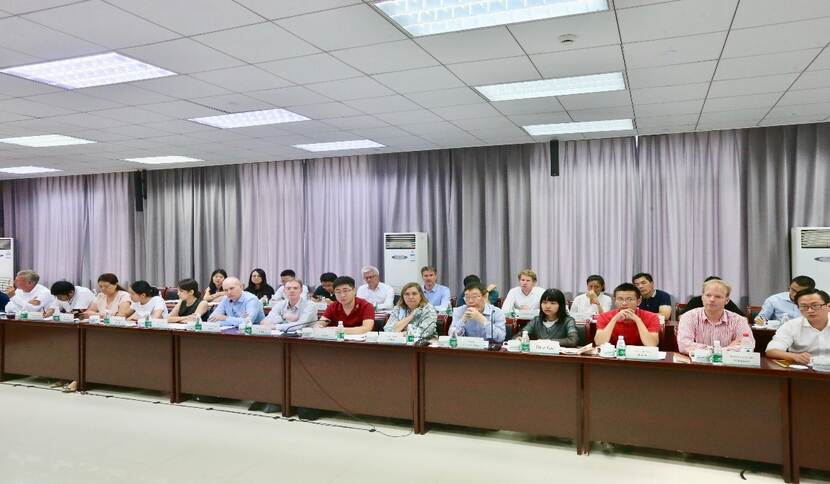 Despite the fact that the roadshow only lasted for two days, the agenda was packed with a wide range of activities. A meeting was scheduled with the Chongming local government to discuss the Chongming Flower Expo that will be held in 2021. Yet another meeting was set up between Chinese horticulture companies and cooperation’s discuss business potential.

Except for official meetings, the organizing committee also organized a seminar themed ‘Sino Dutch Sustainable Protected Horticulture Technology’ followed up by a matchmaking event between the Dutch companies and 27 local horticulture companies from Jiangsu province.  At the seminar, Ms. Jalink presented the crowd with an openings speech in which she emphasized the importance of innovation and the driving force behind steady Dutch development in Agriculture, the famous “golden triangle approach”. 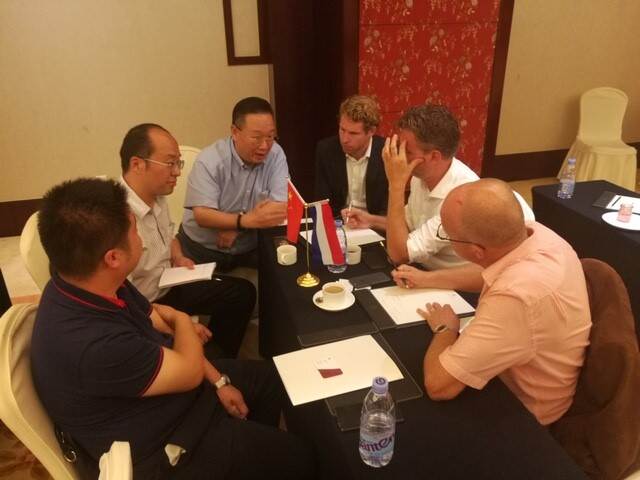 In addition, Mr. Wijdooge, General Manager of Ridder Group Shanghai and Mr. Hong, Agro Food Officer of the Consulate General of the Kingdom of the Netherlands in Shanghai, held a joint presentation on ‘Innovation drives the development of the Dutch horticulture sector’.  They introduced the newest Dutch greenhouse technology, focused on innovation and circular horticulture. The seminar also gave space to Mr. Lin, General manager of HX Agriculture B.V., to introduced his project ‘Dutch Taizhou Oriental Agriculture Town’. 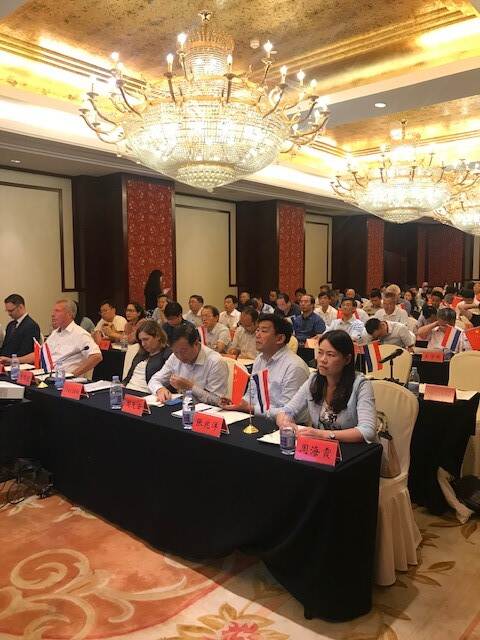 In total, more than 90 people from local horticulture companies, researchers,  government officials and members of the Dutch delegation, attended the seminar.

And last but not least, the Dutch delegation was also invited to attend the ‘Foundation Stone Laying Ceremony for Dutch Taizhou Oriental Agriculture Town’. The accompanying seminar was chaired by Mr. van Ostende, Chief representative of NBSO Nanjing. According to Mr. Mao, director of Taizhou Municipal Agriculture and Rural Affairs Department, there is great potential for the Dutch horticulture cluster in this area. Especially since Taizhou was approved by the Chinese government as National Modern Agriculture Demonstration Zone. “Taizhou is just at the beginning of exploring the possibilities of protected Horticulture”, Mr. Mao indicated. “With the establishment of the Oriental Agriculture Town in Taizhou, more collaboration and business opportunities will be fostered.”

This is the fourth time, the Consulate General of the Kingdom of the Netherlands in Shanghai organized a Roadshow for the Horti-Cluster in the Yangtze River Delta area. There seems to be great interest from Dutch companies to attend organized missions by the diplomatic network. As such we will continue to organize roadshows and other events that facilitate the Dutch business network in China. See below a few statements of the participating companies:

“Through this roadshow, we met 12 renowned Horti companies on Chongming island and with a few, we are now already discussing their project needs.”

“As a Freshteq member Ridder supported the Taizhou Sino-Dutch Agri project. It highlights the need for close cooperation in the whole chain.  Without the great support of the local government and the diplomatic network, this wouldn’t have been possible.” - Fulco Wijdooge, general manager of Ridder Group Shanghai

“The roadshow to Taizhou was very successful for HX Agriculture, I hereby would like to thank especially the Consulate and NBSO Nanjing on making an excellent roadshow program, seminar, and matchmaking”. - Thijs Maathuis, Project director of HX Agriculture BV