The Government was shocked by an unpredicted defeat in the primaries, where the Peronist party obtain 47% versus a modest 32% of the governmental coalition Cambiemos, led by President Mauricio Macri. But most surprising was the triumph of the former Economy minister Axel Kicillof in the Buenos Aires province, where it was supposed that Governor María Eugenia Vidal was going to obtain more votes than President Macri. Mr. Kicillof surpassed 50% of the votes, versus less than 30% for Vidal.

Analysts agree that it will very difficult, or impossible, that Government can reverse the results in the general election, in October 27th. Only a miracle could do it. The first symptom that Macri’s Government is out was the inmediatelly rise of dollar, which jumped from AR$46 Friday 9th to AR$61 in Monday 12th. A descontrolled inflation, an increasing unemployment and poverty, and finally an economy living a huge recession were the factors that push people to massively vote the opposition. Only the rural economy brought good news to the Government this year, leaving a 147 MMT record harvest

Farmers’ unions expressed their support to President Macri despite the re-imposition of the export taxes and the high fiscal pressure. Last time was in occasion of the classic Palermo Show, carried out by the Argentine Rural Society (SRA), the most loyal union to the governmental coalition, that provided the current minister of Agriculture, Livestock and Fisheries, Mr. Luis Miguel Etchevehere. A poll circulated a few weeks ago showed that 80% of farmers supported Cambiemos. Thus, they couldn’t get out from its surprise when results of the primaries were released. But the most astonishing was that Fernandez’s formula was able to impose even in rural areas, where it was supposed that Cambiemos easily won.
For example, in the South of Buenos Aires province and in the heart of the most productive wheat region, Tres Arroyos, Peronism obtained 45,5% versus 35% from government coalition Cambiemos. Another rural city like Chacabuco, in the central region of Buenos Aires, gave the triumph to the Fernandez’s formula. They imposed 47% vs 37%. The same occurred in Junin (44 vs 38%), Salto (46 vs 38%) or Pehuajó (48 vs 38%). Even in Rosario city, where the largest oilseed crushing pole is based, Peronism obtained an easy victory.

Despite Cambiemos won in the most of rural areas, they obtained a narrow margin, far from the 20 or 30 points of difference that they had obtained in 2015 (presidential election) and 2017 (legislative elections).

Farmers in the social networks couldn’t get out of their astonishment and expressed their anger and fury. “I can’t understand how people prefer Kicillof over Vidal”, one of them said. The former Cristina Kirchner’s minister is identified as a Marxist economist. “We will be on the way to be Venezuela”, another stated. Farmers in the networks says that they expect a rising in the export taxes (especially in corn and wheat), and new regulation to export grains and beef. Even the FTA with the European Union is now under uncertainty.

But Alberto Fernandez and Axel Kicillof were showing a high dose of pragmatism in the previous to the primaries. Fernández met the leadership of Rosario Grain Exchange last week, trying to bring them calm. In the Buenos Aires province, Kicillof tried an approach to the farmers, especially with small and medium ones. He toured the rural areas of the province with his modest Renault car, obtaining the sympathy of the people, which last Sunday translated in votes.

Grain operations dropped this Monday. In the futures market MR (MatbaRofex) only 46K tons were hedged, and 85K tons were operated in the spot market (Siogranos) between soybean, corn, and wheat.

The abrupt Peso depreciation meant a 30% increase of the grains expressed in local currency. Despite most of the farming costs are valued in dollars, devaluation of the currency increases the purchasing power of farmers in the domestic market, which not reacts so quickly to the new currency rate.

Thus, this Tuesday the grain markets tried to normalize. Operation in the MR futures exchange jumped to 341K tons, pushed by the soybean, which represented two-thirds of the total volume. Also, spot operations recovered to 270K tons, most due to the corn sales, that summed 206K tons.

“Although nobody knows how much the dollar will cost tomorrow, many farmers were interested to sell yesterday”, an official from Roagro trading house declared. “But rumors about a new increment of export taxes paralyzed the operation. Soybean September prices lost 5 dollars per tonne in a few minutes, and operation stopped; when the minister of Agriculture denied this rumor, the market resumes operations”, the source added.

It is estimated that 24 million metric tons of soybean have not still been sold, worth US$8,000 million.

Both, the current government and the opposition need this money to deal with a country in bankruptcy.

The electoral debacle of President Macri’s government coalition in the primaries hauled down the stock of the largest local agriculture companies in the stocks markets like Nasdaq or NYSE. For example, Cresud ($CRESY) viewed plunging its stock from US$9.95 last Friday to US$6.16 this Tuesday. Also, Adecoagro ($AGRO) also viewed the shrunk of its stock from US$7.05 to US$5.60 from Friday to Tuesday. But even the stock of an ag-tech like Bioceres ($BIOX), which had been granted by the USDA with the approval of its HB4 technology, dropped from US$7.20 to US$6.38 in 24 hours.

CRESUD is one of the biggest farm companies in Argentina, planting more than 200K hectares of cash crops per year,  producing a half million tons. In December 2015, when Coalition Cambiemos took the control of the country, its stock averaged US$11. During 2017 and prior to March 2018 the stock revalued to US$20. When economics got out of order, the stock began to drop until to hit the bottom this week at US$6.16.

Meanwhile, Adecoagro is rundown after the primaries. Its stock also averaged US$11 in December 2015 and stayed flat in the following two years. The fall of the stock started early 2018, previous to the Peso debacle, but currently is expressing its lowest price around US$5.60.

Adecoagro plants 185,000 hectares per year, producing more than 600K tons. This year, the company entered in the milk business buying processing plants to SanCor. Next August 15th, the company will present the 2Q results, when the investors probably will ask about the current circumstances.

Finally, Bioceres is a biotechnology company founded in 2001 by a group of farmers. They accessed to the discovery of the scientist Raquel Chan, who found a gen in the sunflower related to the drought resistance. In partnership with the Conicet (the national R&D institute) Bioceres moved the gen from sunflower to soybean and wheat. The HB4 in soybean crop was authorized by Argentina and Brazil. But last week, the USDA also approved the technology, pushing the stock price up to US$7. Although the market expected that rising continues, this week the stock seems to be hauled by the generalized economic and financial crisis of the country. 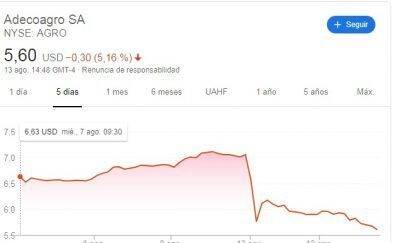 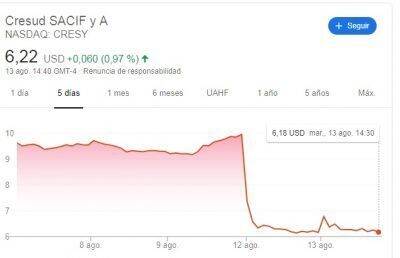