Spain: 5 reasons for subtropical crops to be fashionable

Subtropical crops are going through an excellent time in Spain. A Cajamar’s expert analyses mainly avocado, mango and cherimoya, whose production value reached €325 million in 2018. 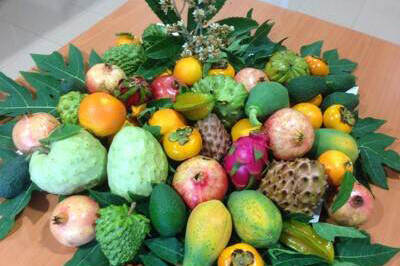 Avocado is the subtropical fruit par excellence, taking up an acreage of 12,850 hectares in Spain, concentrated in the coastal areas of the south of the peninsula and in the Canary Islands. Specifically, the provinces with the largest surface area are Málaga (56% of the total) and Santa Cruz de Tenerife (12%).

As Fig. 1 shows, since 2013, the boom of this crop has been very relevant, mainly due to the increase in acreage and a greater demand. 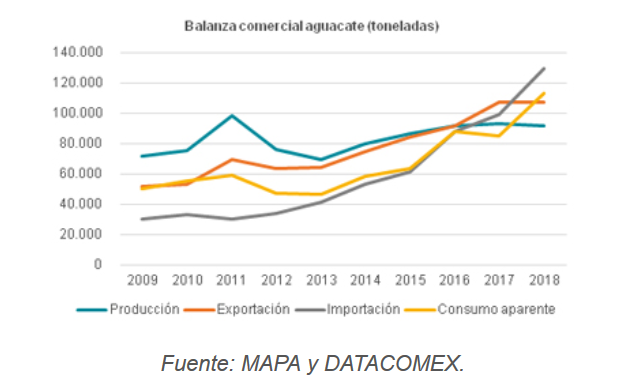 The main market for Spanish avocados is France, followed by Germany, UK and the Netherlands. There is a strong domestic demand as well.

More than 94% of the cherimoya acreage is located along the Granada’s coast, while the remaining 5% is located on the east coast of Málaga. National production has remained stable in recent years, at around 44,000 tons, over an area of around 3,100 hectares.

The harvest of this fruit is concentrated between September and November, extending its campaign until the end of May thanks to the spring production. The domestic market consumes around 80% of production.

3. The taking-off of mango

This is one of the tropical fruits, which has experienced the greatest increase in recent years, currently standing at 4,713 hectares (Fig. 2). 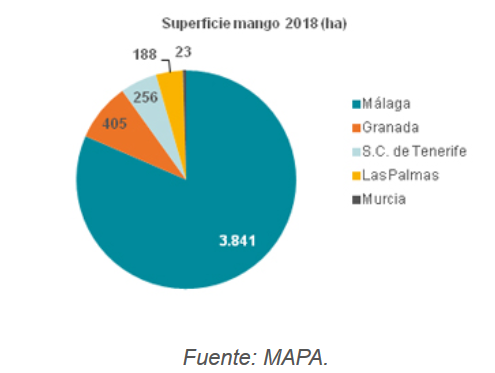 It is mainly concentrated on the coast of Málaga, where numerous intensive plantations have been carried out in recent years.

The evolution of its foreign trade (Fig. 3) shows the importance this fruit is undergoing. 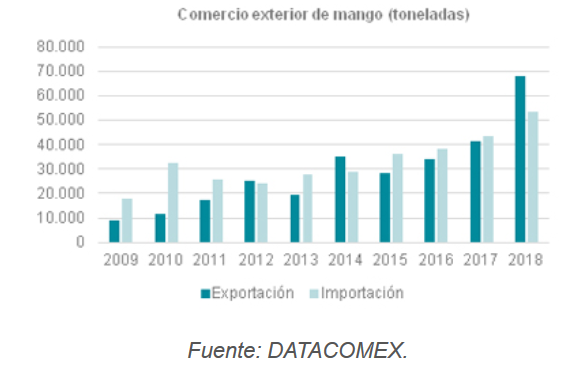 Imports come from tropical countries like Brazil (42%) and Perú (31%).

Last July, the first mangos where grown in greenhouses in Andalucía. The season starts in September with the open-air crops.

During the present season, still unfinished, average prices are showing slightly lower values than those of previous seasons, in both avocado and mango. Only cherimoya has an average price equal to last season’s (Fig. 4). 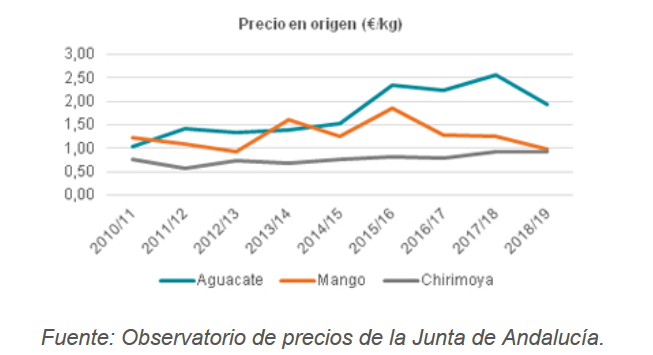 Even so, the three crops analyzed show interesting yields, with average figures of around 12,000 kg/ha and a gross operating margin of over 9,000 €/ha.

Taking into account the unproductive period of the first few years after planting, it can be considered that the investment's return is achieved in the 6th year after planting or even earlier depending on the amount invested.

The exceptional climatic conditions of the Spanish growing areas, together to their proximity to the markets, allows a longer ripening on the tree compared to those coming from tropical countries. This results in a better organoleptic and nutritional quality of the fruit.

The 10 largest national companies of tropical and exotic fruits have gone from selling just over 310,000 tons in 2015 to almost 390,000 tons in 2018, highlighting the good times this sector is going through.

In recent years, these groups have been investing in ready-to-eat and convenience products, for which they are making significant investments in order to obtain added value. These food products include pure nectar of cherimoya and mango, refrigerated guacamole, sauces, juices, liqueurs, etc., aimed at both the Horeca channel and the supermarkets.