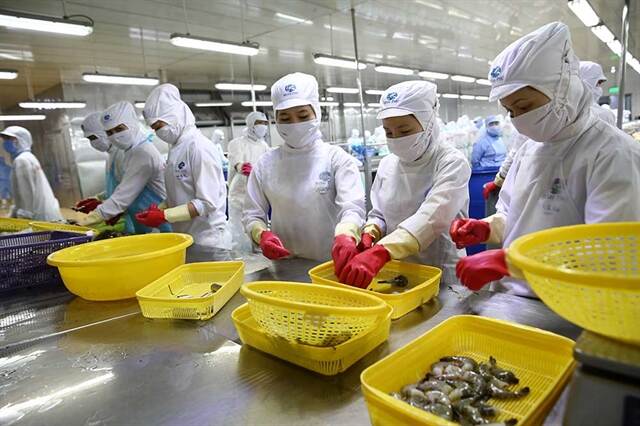 Workers on a processing line at a Minh Phu Seafood factory

The purchase was made through a private placement worth nearly VND 3.04 trillion (US$130.5 million), equivalent to VND 50,630 per share, a 40.6 per cent premium over MPC’s closing price on Friday.

On its website, Mitsui wrote that Minh Phu Seafood has built a strong position by vertically integrating all stages from shrimp farming to processing and sales. The company owns two processing plants and 900 hectares of shrimp farms in southern Vietnam.

Its products are exported to around 50 countries, notably the US and Japan, accounting for about 20 % of Việt Nam’s total shrimp exports.

However, shares of Minh Phu Seafood, coded MPC on the Unlisted Public Company Market (UPCoM), have plunged 15% since mid-May after the company was accused of evading anti-dumping taxes in the US.

Early this month, a US congressman called on the US Customs and Border Protection (CBP) to investigate allegations that Việt Nam’s Minh Phu Seafood had possibly evaded anti-dumping duties on shrimp from India.

The Vietnamese company was alleged to have purchased large amounts of frozen Indian shrimp before “minimally processing” them in Vietnam and selling them to the US as Vietnamese products.

In an official statement on its website on Friday, Minh Phu said it had not received any information or requests from the CBP or any relevant US government agency related to the allegation.

The company confirmed its shrimp products are still entering the US as normal.

It did not deny it had imported shrimp from India due to a shortage of raw materials in Vietnam, though it noted that the Indian products made up just 10% of its total imports of raw materials.

“We use shrimp imported from India not for the purpose of evading anti-dumping taxes applicable to shrimp products but to meet the increase in demand for processed shrimp from markets other than the United States,” it said in the statement.

It said exports to the US in the first quarter this year reduced to about 33% of its total exports, a decline from more than 41% in 2015.

The company also said it has diverse sources of shrimp raw and halting imports from India would not affect its production and export activities.

According to a lawyer for the company, under the 2015 Enforce and Protect Act, CBP will have 95 days to consider the allegation before initiating an investigation. Whether CBP initiates an investigation or not, the company will strictly abide to US laws and WTO regulations, the lawyer said.