The export value of agro, forestry and seafood products reached a record US$36.37 billion this year, a year-on-year increase of 13 per cent, according to the Ministry of Agriculture and Rural Development. 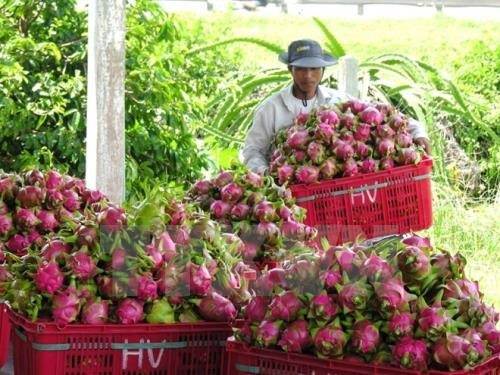 The nation also saw strong growth in rice exports in December with a volume of 426,000 tonnes worth $199 million. Total rice exports for the year reached 5.89 million tonnes, earning $2.66 billion, a year-on-year surge of 22.4 per cent in volume and 23.2 per cent in value.

China continued to be the largest buyer of Vietnamese rice, accounting for 39.5 per cent of the total exports.

Average rubber export price for 11 months stood at $1,654.7 per tonne, up 28.3 per cent over the same period in 2016. China, Malaysia and India were the three largest rubber buyers.

High prices pushed cashew nut exports to 353,000 tonnes worth $3.52 billion, a year-on-year increase of 1.9 per cent in volume and 23.8 per cent in value. The US, the Netherlands and China were top importers.

Exports of cassava and cassava products were estimated at 3.95 million tonnes in volume and $1.04 billion in value for a year-on-year surge of 6.9 per cent and 4.2 per cent, respectively.

However, coffee exports decreased slightly by 20.2 per cent in volume to 1.42 million tonnes and 3.8 per cent in value to $3.21 billion. Germany and the US were still the top two export markets for Vietnamese coffee.

The ministry said that in 2017, fruit and vegetable exports also reached a record $3.5 billion for year-on-year growth of 43.02 per cent.

In addition to traditional markets, Vietnamese fruit has managed to enter demanding markets like the US, European Union, Japan, Canada, Australia and New Zealand.

Nguyễn Hữu Đạt, general secretary of the Việt Nam Vegetables and Fruits Association, said vegetable and fruit exports continued its strong growth in value this year, exceeding the export value of some key export products like rice, oil and gas.

He said that in 2018 and further, besides improving the quality of vegetables and fruits, enterprises need to focus on processing as a way to add value and extend exports throughout the whole year, not just during specific seasons.

Enterprises can only select 40-50 per cent of harvested vegetables and fruits for export on quality considerations, so the remaining quantity should be processed to get higher value from them, he added.