Agroparks and agrologistics have full attention in Mexico. On government level and in the private sector developments are taking place. 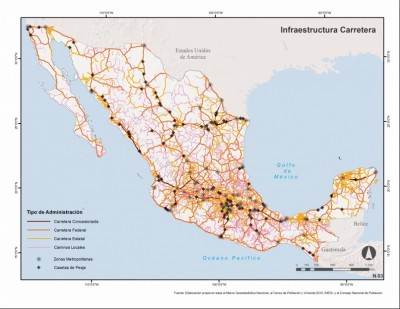 The bilateral cooperation in agroparks and agrologistics always had a strong government to government component in which cooperation  the WUR (alterra (agroparks) and Food and Biobased research ( agrologistic) has played and still plays an important role.

As part of the national agropark system published in December 2013, a component in the “Programa de Productividad y Competitividad Agroalimentaria” several activities have been developed.

At this moment the agroparks in Aquascalientes and Chiapas are being realized and will be inaugurated in the end of this year or in the beginning of next year. Alterra is not anymore involved in this phase.

After that Food and Biobased research received the request of Sagarpa to work out a national agrologistic plan.The plan was presented to the minister in the fall of 2014. At that moment Mexico was the 20th exporter in the world for agricultural products with a value of $24,5 bln USD (2013). The export has grown since 2000 with yearly 8,5%. The plan did foresee in developing the potential of the  chain of the sector that Mexico would be amongst the 10 major exporters in 2030. In 2015 the export of agriculture exports of Mexico had a value of 29 bln USD compared to 82,4 bln € for the Netherlands. Needless to say how much potential Mexico still can develop.In the same year the agricultural sector passed by the energy sector  as the second most important sector for the Mexican economy after the car industry. Just the beginning of a development. According to the FAO estimates   also 37 % of the food is being lost in the chain in Mexico because of poor logistics.

The development of agroparks had an important place in this agro logistic plan. Part of the plan was to establish a ministry of logistics and a national council for agro logistics at federal level to reduce the losses in the chain and the logistic costs. Unfortunately it was never realized

In march 2015 the minister of Agriculture of the Netherlands visited  Mexico and offered 100.000 € to kick off thestocktaking of the first agro logistic projects on basis of the national plan. The concrete projects were presented by the WUR to Sagarpa in the fall of 2015 but because of a minister’s change the process was delayed with 6 months.

In the beginning of 2016 Sagarpa decided to choose 2 projects in Chiapas and Guerrero (cocos and bananas) and two more in Michoacan are under discussion. (berries and avocado’s).

The first agropark was realized in Queretaro in 2006.It is an Integrated Greenhouse Cluster. The Park is aimed at vegetable growers seeking to compete successfully in the NAFTA, to export products to the VS and Canada.

It was an important step in the modernization of the Mexican horticulture sector while optimizing the use of resources and bringing benefits to the municipality of Colón, located in the state of Querétaro.

The 823-hectare Park was founded and developed with private equity and support from FOCIR (Mexico’s Rural Sector Capitalization and Investment Fund). The goal was to build high-tech greenhouses to grow export-quality vegetables and flowers. The Dutch company Levarth/Freshmex has been involved successfully right from the start of the park. In total 11 Mexican and international agricultural businesses operate at the Agropark, with a combined annual production of 81,300 tons. Sixty-five percent of this production corresponds to tomato varieties and 35 percent to bell pepper and cucumber. It must be noted that 95 percent of total production is exported to the United States and Canada. At this moment the existing agropark will be extended. The new phase will add 528 hectares, 220 of which will be used for greenhouses. This will increase the Park’s total vegetable production by 122 percent to 205,000 tons per year. The remaining 362 hectares will be used for warehouses, green spaces, and a residential area, turning Agropark into an Agro-Intelligent Solutions Center.

A new agropark will be founded by Elias Mekler and Mauricio Revah who were also responsible for the design and development of the Agropark. The EGHP is based on an association of investors who can co-invest in developing the required human capital, technological infrastructure and financial resources to achieve competitive productive yields and support smart greenhouse horticulture. The group is in contact with Sagarpa to use the earlier mentioned program to promote agricultural parks in Mexico .The EGHP will be managed by United Farms, a group of experienced greenhouse producers.  United Farms is one of the most innovative tomato growers in the world. The project of 228 ha will be used for 150 ha of high-tech greenhouses, a centralized packing and commercializing unit, a heat plant, seedling production, an irrigation water treatment plant, a technology transfer and training center, a water sewage treatment system and a plant using the excess horticultural products to produce dehydrated and processed agricultural products and /or using vegetable compost to produce liquid organic fertilizers. Goal is to establish a fully integrated agropark with reduction of GHG emissions and with lower operational costs than tradition vegetable production, efficient water use and production of renewable energy.

Given the enormous agricultural potential that Mexico has in several states and the growing interest for agroparks, combined with the fact that this potential  can only be realized if at the same time the agrologistics in Mexico will be improved, the expectation is that both at a government , knowledge institute as private sector level the coming years agroparks and agrologistics will be promising topics in the bilateral cooperation between the Netherlands and Mexico.