Bulgaria: Trade in Livestock with Turkey to Resume in 2018

Trade in livestock with Turkey is expected to resume at the start of 2018, Agriculture, Food and Forestry Minister Roumen Porozhanov said, speaking at a joint news conference with Turkish Minister of Food, Agriculture and Livestock Ahmet Esref Fakibaba, who is paying a visit to Sofia. Fakibaba leads a delegation of 150 Turkish business people, who took part in a Bulgaria-Turkey agribusiness forum on Monday. The more than 500 participants in the forum shared expertise and good practice in the field of agriculture. 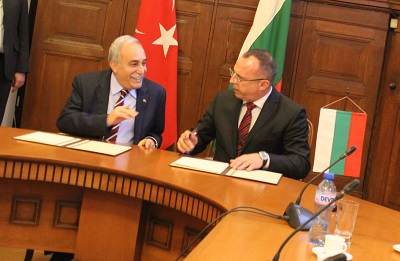 Porozhanov stressed the importance of ensuring that the resumed trade is transparent and properly supervised "so as not to cast a doubt about the prices and quality of the produce that will be traded". The Bulgarian Minister said that the teams of the two ministries spared no efforts for the preparation of the trade agreements in the course of more than ten preliminary meetings, including Monday's agribusiness forum.

Porozhanov said that for four months after the first meeting in Ankara, the two ministries and the Bulgarian Food Safety Agency have carried out intensive work to restore the cooperation in husbandry and trade in livestock not meant for breeding. He recalled that the bilateral trade in all livestock save breeding animals was suspended in 2012. Porozhanov said that at the moment all problems relating to veterinary certificates and other purely administrative but important formalities have been solved.

Fakibaba said that the agreements reached on Monday are the result of a "marathon of intensive meetings". The Turkish guest thanked for "Bulgaria's exceptional hospitality". He said that the teams continue to holds meetings. "When a commodity I am looking for is available next door, I would prefer to take it from there," Fakibaba said.

The Turkish Minister said that the policy towards imports and exports between Bulgaria and Turkey is to be revised so that Bulgaria is made a favoured partner.

Porozhanov said that the opportunities for exchange of farm machinery have not been discussed in the past months. However, the agribusiness forum discussed all aspects, "from seeds to fertilizers to plant protection preparations," he said.