Despite being the world’s sixth-largest producer of pork, Vietnam exports just 20,000 tons per year. Improvements in the quality of Vietnamese pork are crucial if the country’s vision of becoming a major exporter of the meat is to be realized, experts said at a forum in Hanoi last week. 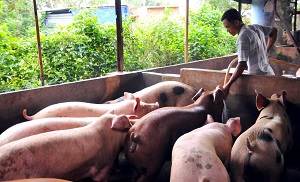 Vietnam’s total pork production in 2017 is forecast at around 2.75 million metric tons, ranking it sixth in the world behind China, the European Union (EU), the U.S., Brazil and Russia.

However, Vietnam exports a mere 20,000 tons on average per year, or less than 0.73 percent of its total production, despite growing global demand.

Vietnam’s low transport and labor costs, coupled with the implementation of new technologies, have enabled the country to produce pork at a more competitive price than its competitors.

However, concerns over the quality and safety of Vietnamese pork have stopped importers from opening up their markets.

Earlier this month, thousands of pigs were found to have been injected with sedatives shortly before slaughter at Ho Chi Minh City’s largest slaughterhouse.

Though all of the sedated pigs have since been scheduled for incineration, the scandal shook the public’s perception of the popular meat.

South Korea imported US$5.8 billion worth of pork in 2016, Lee said, though most came from trusted sources like the U.S., Germany and Spain.

Vu Manh Hung, general director of Hung Nhon Group, said that most of his foreign partners had asked for their pork imports to be of traceable origin and risk-manageable before signing any contracts.

This poses an immediate challenge for local producers, who have become used to selling their pork without providing any information regarding its origin, Hung said.

The latest effort by Ho Chi Minh City officials to impose a ban on so-called homeless pork  – pork without tracking tags that provide a history of its journey from farm to slaughterhouse to market stalls – was met with widespread criticism by local merchants.

According to Nguyen Xuan Cuong, the Minister of Agriculture and Rural Development, the value of Vietnam’s pork industry is higher than rice, but export revenues paint a totally opposite picture.

“Businesses have begun,” Cuong said, “but the remaining task is for the authorities to promote trade and open up foreign markets.”