Solutions for small farmers in Romania

How could dairy players support the increase of farms by 10-50 cows? "Small farmers want to develop, but the processors have to give them a good price and ensure the sale of their production".

"The solutions for the development of small farms with 10-25 heads of cattle are either for farmers to associate in a cooperative type, or the Ministry of Agriculture has to find a national strategy to increase the number of cattle from farms."

Survival and development of small dairy farms in Romania, with 10-50 heads of cattle depends on working with dairies factories, which is the channel that provides funding and may stop decreasing the cows’ livestock in Romania. The number of cattle decreased during the last decade from 2.8 million to 1.9 million heads, according to the data from the National Institute of Statistics. During the same period, the milk production decreased by a quarter of the quantity.

"Small farmers want to grow, but processors must have a correct approach towards them, to give them a good price and ensure the sale of their production," says Alina Donici, who built the dairy business Artesana together with her husband Daniel, which produces dairy in a factory in Tecuci. The entrepreneur says that the company she represents works with 15 local suppliers of raw milk, and the milk is collected from each farm individually, the dairy producer sending each day their own tanks to the farm’s gate. "We work with small and medium farms, which have up to 50 cows. For seven years we work with the same suppliers, and each one of them developed, because we offer the right price for the raw material. Those who used to have 10 cows, have now 30, and those who had 25-30, have now about 50, "said Alina Donici. She did not provide any details about the purchase price of milk.

Dorin Cojocaru, the president of the Romanian Employers Association in the Dairy Industry, says that investing in modernization and expansion of farms could be a solution for small farmers to move to another level, however, considering the small production of milk and the income as such, they cannot afford to do that.

Attracting non-reimbursable European funds would be an option to consider, but farmers must contribute with 25% of the amount to the total value of the investment. "Solutions to develop small farms with 10-25 heads of cattle are either for farmers to associate in a cooperative, or for the Ministry of Agriculture to think a national strategy to increase the number of cattle farms. For example, a farm with 50-100 cows is profitable for all players in the market”, explains Dorin Cojocaru, president of the Romanian Employers Association in the Milk Industry (APRIL).

Farmer Radu Moldovan, who is a part of the Cooperative Bovis Alba Transilvania, consisting of six farmers from Alba county, which have a total of 900 cattle and a production of 7,500 litres of milk, says he cannot support investments in increasing the production.

"Increasing the capacities of farms is not an option that we consider, because it involves too large investments, which we cannot sustain. We tried to expand and we submitted a project for European funds, but we failed to obtain financing, and the banks are reluctant”, he explains.

Under the umbrella of a cooperative, farmers have more tax facilities and they have access to non-reimbursable financing from European funds more easily. Among the tax facilities for cooperatives there is the exemption from the payment of the tax on profit in the first five years for agricultural cooperatives processing agricultural products; exemption of the members from paying the income tax for the production exploited through the cooperative or the exemption from tax on property of the buildings and lands of the members of the production exploited through the cooperative.

Radu Moldovan claims that the zootechnics is a pretty difficult branch of agriculture because the program in the farm is permanent, “without holidays, without weekend”. He says that work starts at 4:30-5:00, but he never knows when it ends, and "the distribution on the food chain is incorrect. The producer receives the least, but works the most. The trader makes the most of the profit, then the processor and finally the producer. It is unfair”, he says.

The farmer did not specify the price of the milk going from the farm’s gate, due to the confidentiality set up in the contract with the processors. However, he said that the price of the raw milk sold from his farm has increased by 20-30% since he became an associate, three years ago, due to the higher quantity that the dairy producers can provide. “There are two types of farms in Romania, small, with up to 100 cows and medium and large farms, exceeding this cattle capacity. The price of raw milk at the gate of medium and large farms is 1.4-1.5 lei/litre, and it is delivered to large and authorized processors. The price of the milk from small farms starts from 1.35-1.6 lei/litre and it is delivered to milk collection and processing centres. In both cases, prices are similar to those in Hungary or Poland”, explains Dorin Cojocaru, president of the Romanian Employers Association of the Milk Industry.

He says that milk is not a product with high added value, the profit obtained from its marketing is of 1-3%. From producer to consumer, the raw milk goes through at least four intermediaries - collector, processor, distributor, retailer - and the margins of addition added by each operator lead to the price of milk being three times higher than the price for the buyer compared to the starting price from the farm. For example, if the price of a kilogram of milk from the farm’s gate starts from 1.35-1.4 lei, it goes through some intermediaries, and its price exceeds 5 lei in the shops of foreign merchants.

"In its path, the milk, from the producer to the final consumer, there are a number of factors involved in the cost structure, starting from the cost of raw materials according to the quality standards, and also including the labour force, laboratory analysis to ensure the product’s quality and safety, raw material storage under optimum temperature and food safety conditions, periodic audits, and also technological processes, energy costs, packing and packaging processes, transport from the farm to the producer, from the producer to the logistics centres and form there in the stores, but there are also other logistical issues involved in placing, monitoring and ensuring the product’s quality on the shelf”, says Valer Hancas, communication and corporate affairs manager of Kaufland Romania, who adds that all these elements are reflected in the final price of the milk.

Romania currently has over 1,750 cow farms, according to the data from the National Veterinary Sanitary and Food Safety Authority (ANSVSA). According to the representative of the Romanian Employers Association of the Milk Industry, processing 80% of the milk for processing, Romania's annual production of raw milk is of 4.2 million tons.

Out of the total number of farms registered as limited liability companies (SRL), over 70 are small farms, with 10-25 head of cattle, and over 100 are considered to be households, since the number of cows is between 1-10, according to ZF calculations based on the data from ANSVSA. 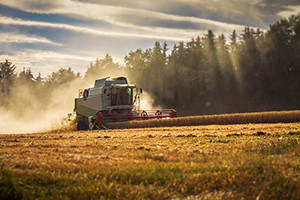