Factsheet - The flower sector in Mexico

The flower sector in Mexico exists since four decades. Mexico positions itself as the fourth producer worldwide in production of flowers and in extension of cultivation.  In this section there are some facts and figures about the sector. 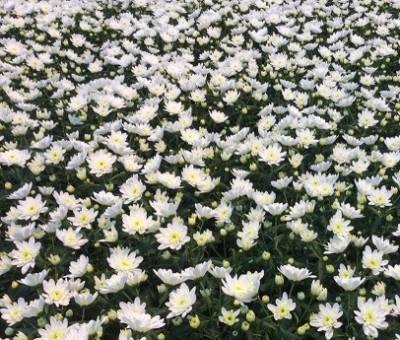 In 2011, the extension of land dedicated to floriculture was of 18,629 hectares.

Seven out of ten producers come from Estado de México, Mexico City, Jalisco, Morelos and Puebla. Estado de México is the principal Producer State in Mexico (60%) and the municipality of Villa Guerrero (in the same state) produces 30% of the state’s value.

According to the authorities, 75% of the production is realized in open field and 25% in greenhouses, principally roses, gerberas and potted plants.

In 2012, the Ministry of Agriculture from Mexico estimated that production in greenhouses was valued in 2.3 billion MXN and the principal flowers were roses (24.8%), chrysanthemums (18.1%), liliums (8.7%), carnations (7.7%), gerberas (7.1%) and gladiolas (13.8%). Regarding poinsettias, the states of Morelos, Michoacán and Mexico City are the principal producers of a market valued in 325 million MXN.

The production of flowers in Mexico is mainly destined to the domestic market (80%). The Mexican consumption of flowers was valued in 2013 at 550 million USD.  The remaining 20% is exported to the United States (96.6%) and Canada (3%). There is here a clear window of opportunity to export to Europe.

The most exported flowers are gladiolas, roses, liliums, alstroemerias, carnations, strelitzias and daisies.

The State of Mexico is the principal Exporter State, with the best facilities and 80% of the production is premium, exclusive for exports.

Mexico can position itself as an important player on the flower market in Europe, complementing the existing offer and competing pricewise. However, the Mexican producers need to upgrade their facilities to be less dependent on the climate for the production and also to produce premium products. Logistically there is a need for improvement to export the products to Europe. There are business opportunities for Dutch companies in this sector in Mexico. The Netherlands, being the gateway to the European market, is the best partner for Mexico to develop the potential of the flower sector.