Visit of Minister Schouten of Agriculture, Nature and Food Quality (LNV) to Ghana and Côte d’Ivoire

From Monday 4 February to Thursday 7 February 2019, Minister Carola Schouten visited Ghana and Côte d'Ivoire. The Minister’s visit came a year after LNV sent an agricultural counsellor to West Africa after a 25-year absence from the region, and it underlined the importance the Ministry of LNV attaches to West Africa as its new region of focus. 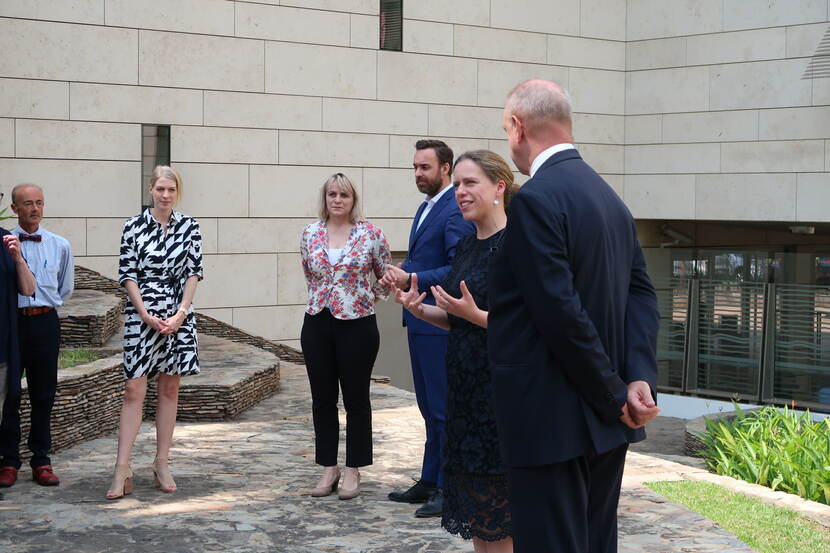 Minister Schouten at the Netherlands Embassy in Accra, Ghana

The visit introduced Minister Schouten to the great challenges and opportunities West Africa is facing in agriculture and food security, and the areas in which Dutch government and industry players can contribute. West Africa’s major challenge is to ensure food security amidst rapid population growth and climate change, while the region is already unable to feed itself due to low productivity and large post-harvest losses.

The program was built around the sectors and themes that are prioritized in the work of the agriculture team in West Africa, namely horticulture, poultry, commodity trade (specifically cocoa) and irrigation – as detailed below. Official bilateral meetings served to strengthen our good ties with Ghana, Côte d’Ivoire and the African Development Bank, and to agree on new forms of cooperation.

The program also gave Minister Schouten an opportunity to reflect on how her vision of moving towards circular agriculture (to be found here) can be translated to the West African context. The Minister intends to move from food production against the lowest possible costs, to a food system built around minimal use of raw materials. While production increase is still necessary in this part of the world, it is important to also take note of the potential environmental impacts of food production by smartly re-using and recycling residual product. The Netherlands is pioneering in this regard.

The Ghanaian and Ivorian horticulture sectors are full of potential, but in need of professionalization to contribute to their national economies, reduce import bills and improve food security.

Phytosanitary issues led to an EU-imposed ban on Ghanaian fruits and vegetables in 2017. Working together with the European and Ghanaian authorities, the Netherlands Embassy has played a major role in abolishing this ban. An important feature of this is improved quality guarantees and export controls. During a visit to the PPRSD (the Ghanaian counterpart of the NVWA) at the airport, discussions touched upon the underutilization of the PPRSD, the strict conditions of entering the European market and the removal of rejected products. Disapproved products are often not consumed locally with food waste as a result.

The field visit in Ghana on Tuesday was centered around HortiFresh, a Dutch-funded program aimed at professionalizing the fruit and vegetable sectors in Ghana and Côte d’Ivoire. The delegation visited Joekopan, a HortiFresh-supported vegetable-exporting business, and their outgrower farmers.

A major discussion point was the nature of Ghana’s food supply: products that could be produced locally are largely imported, and locally produced fruits and vegetables are often destined for export, due to higher prices abroad compared to the local market and low local demand for these products. 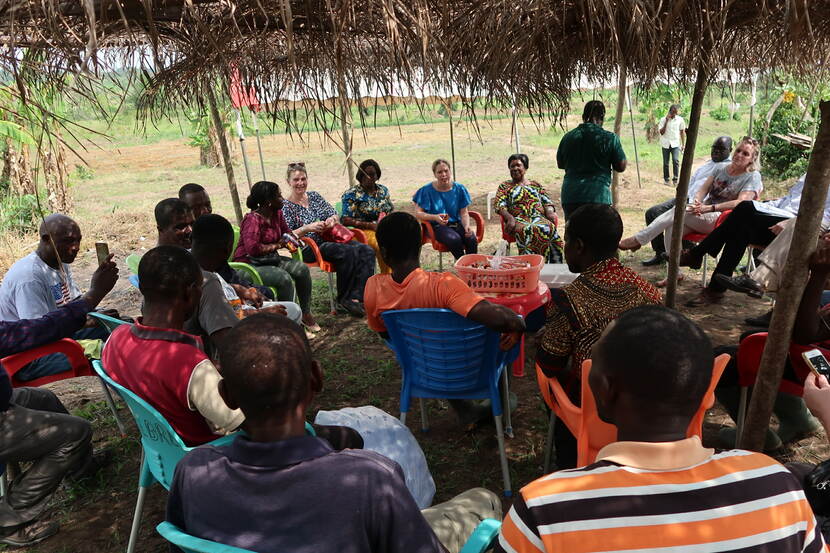 A discussion with outgrower farmers during the HortiFresh field visit

Also on Tuesday, the delegation witnessed a signing of a financial agreement between the Rabobank Foundation and HortiFresh for Joekopan investments in a dam and irrigation equipment, as well as for pre-financing of improved seeds to 60 outgrowers. Minister Schouten held a brief congratulatory speech. Access to finance is a major constraint for the growth of small and medium-sized enterprises in Ghana and Côte d’Ivoire, and is a major focal point for the Dutch Embassies in these countries. The goal is to guide companies to a bankable status, and this financial deal is an important first step.

The program ended with a tour of Blue Skies Ghana Ltd., a company that processes and packages locally sourced tropical fruits for European supermarkets such as Albert Heijn.

If you want to know more about our activities in horticulture, please get in touch with HortiFresh through hortifresh@snv.org.

Although poultry meat and eggs are staple foods in West African diets, local poultry production has become entirely dependent on imports. Nearly all consumed poultry meat in Ghana is imported, and although consumed eggs are still produced locally, necessary inputs such as feed also have to be imported. This is the result of policy choices in the past, where imports took precedence over local production.

Circularity in the Ghanaian poultry sector

On Wednesday morning, Minister Schouten took part in a roundtable on circularity in the Ghanaian poultry sector with Dutch and Ghanaian players. The sector has to be built nearly from scratch, which requires extensive investments in knowledge and infrastructure. The Minister highlighted that this also presents an opportunity to build the foundations for a sustainable and circular sector.

After this, the Minister took part in and held a speech at the festive "groundbreaking ceremony" to mark the start of the construction of an animal feed factory in Ghana by Dutch feed producer Koudijs-De Heus. The factory will produce 25% of Ghanaian animal nutrition, of which the aim is to source 50% of inputs locally. This is a great step to reduce Ghana’s import dependency in poultry and other livestock. 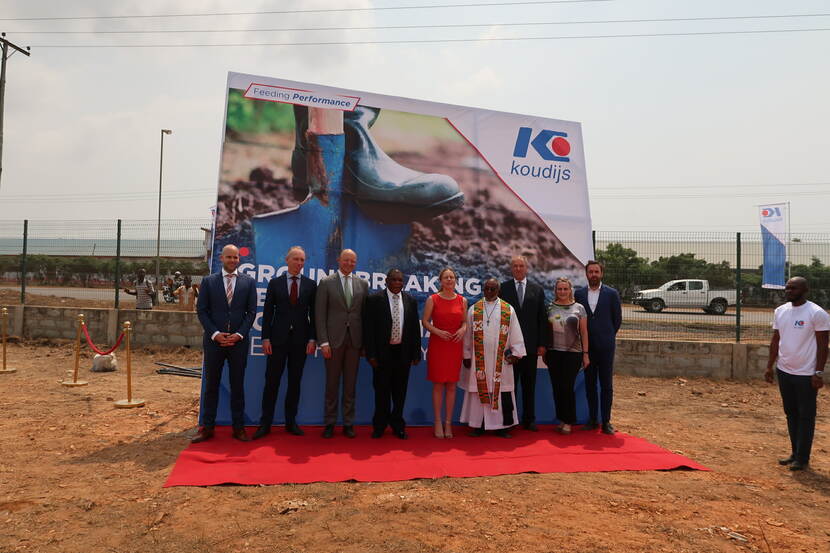 We are organizing a poultry seminar in Kumasi on May 29, 2019. If you are interested or want to learn more, please contact us through ACC-LNV@minbuza.nl.

Ghana and Côte d’Ivoire have a lot to gain in the area of ​​irrigation: the rainy seasons are short and are becoming less reliable, while the water bodies of West Africa remain largely unused. In Ghana, less than 0.2% of cultivated land is under irrigation.

Minister Schouten took part in a lunchtime session on Climate-Smart Agriculture, with special attention for irrigation and the role of Dutch investments. Invited were Tom Durang and Henri Wientjes, two Dutch entrepreneurs with years of experience in Ghana. They set up a company in northern Ghana which produces food on irrigated fields and supplies irrigation water to farmers in the area. Durang and Wientjes indicated that irrigation promotion, better farm technology, mechanization and access to better seeds can enable smallholder farmers to scale up.

The Côte d’Ivoire-leg of the visit was mostly focused on cocoa production and trade. Côte d’Ivoire is the largest cocoa producer in the world, producing 40% of the world’s cocoa. Ghana is second, producing 20%, and the Port of Amsterdam is the world’s largest importer of cocoa. The cocoa value chain is relatively opaque and its production has been associated with issues such as poverty, child labor and deforestation. On March 26, 2018, the declaration of Abidjan was signed by the Heads of State of Ghana and Côte d’Ivoire in order to devise a common strategy in the cocoa sector.

Wednesday evening, Minister Schouten had an informal dinner with partners from the Dutch Embassy in the cocoa sector. At the table were representatives from IDH, Solidaridad, Fairtrade, UTZ/Rainforest Alliance and Cocoanect. The topics discussed were financing, social issues, ecological issues and traceability/certification.

Thursday morning, Minister Schouten visited a cocoa warehouse, the Port of Abidjan and a cocoa processing facility, together with representatives from the industry and a cocoa cooperative. Over lunch, representatives from Tony's Chocolonely and Barry Callebaut were invited to discuss concerns in cocoa production and trade, in particular traceability, farmers’ incomes, income diversification, and the role of new players in the supply chain (mainly Asian). 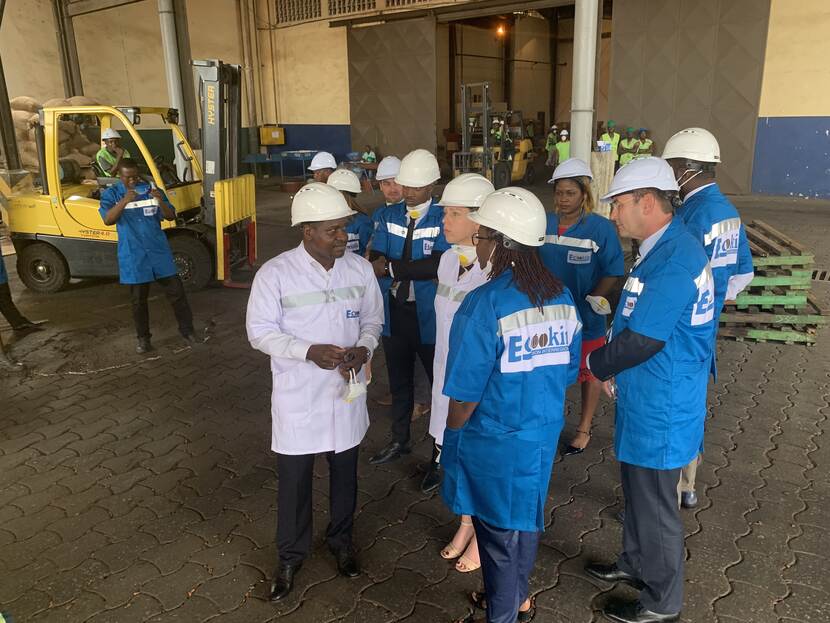 The Minister receiving a tour during the cocoa program in Abidjan, Côte d'Ivoire

Between 350.000 and 400.000 young people enter the labour market each year, while there is a severe lack of employment opportunities. In Côte d’Ivoire the Netherlands focuses on youth entrepreneurship through the Orange Corners program. The aim of Orange Corners is to contribute to a thriving startup ecosystem, which builds skills, confidence and economic empowerment for the country’s youth and provides them with opportunities that go beyond national borders.

The last formal part of the program was a meeting with Ivorian agriculture start-ups. The young entrepreneurs that were introduced base their interventions on modern communication tools, drones and other state-of-the-art techniques, and are currently part of a program called SPEED farmer which is headed by IncubIvoire, a local accelerator. After completing their program in Côte d’Ivoire, the start-ups are invited to the Netherlands where LNV, together with RVO, will link them to Dutch entrepreneurs. This invitation was formalized through an MoU that was signed by Minister Schouten and her Ivorian counterpart, Mamadou Sangafowa Coulibaly. 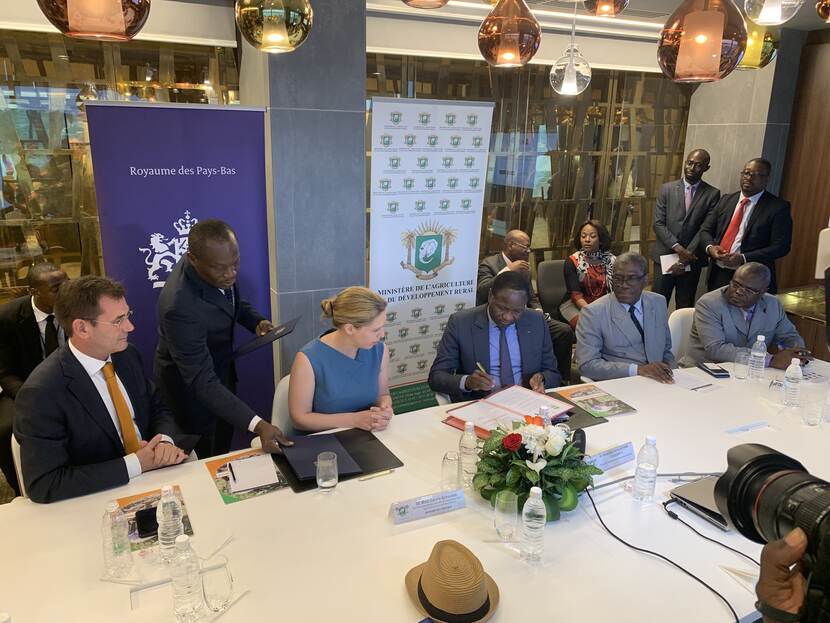 If you are interested or want to learn more about our entrepreneurship programs, please contact us through ABI@minbuza.nl.