“More Business Opportunities for the Dutch Pork Sector than ever before.”

Last week we were at the 23rd International Exhibition for the Food, Drink, Hotel,  Restaurant, Foodservice, Bakery & Retail Industries Exhibition (FHC) in Shanghai. The venue of 120.000 square meters hosted over 3000 exhibitors from 48 countries. But despite the magnitude of this trade show, the Dutch pork businesses found a way to stand out.

At one of the biggest food trade shows in China, FHC, held from the 12th until the 14th of November, we met with five of the six members of the “Trusted Pork from Europe” initiative, an campaign financed by the EU and executed by the Dutch National Association for Meat Industry (COV). With their campaign, the COV aims to promote the quality and the safety of pork products from European countries and to secure access to third markets, such as China.

The five companies that were present at the FHC were Westfort Meat Products, Vion Food Group, Compaxo, Wellink, and Gosschalk. Together, they represented 10 Dutch pig slaughtering plants based in the Netherlands, that export pork meat to China. And their business is needed.

As a direct consequence of the devastating African Swine Fever (ASF), China’s pork prices more than doubled in comparison to October 2018. Despite the attempts of the Chinese government to release some of the pressure on the pork market, such as releasing their strategic storage and their calling for the all-out measures to support pig farms to recover their production, more time is needed. This all creates opportunities for Dutch pork exporting companies. And where better to promote that than at one of China’s largest food trade expos. 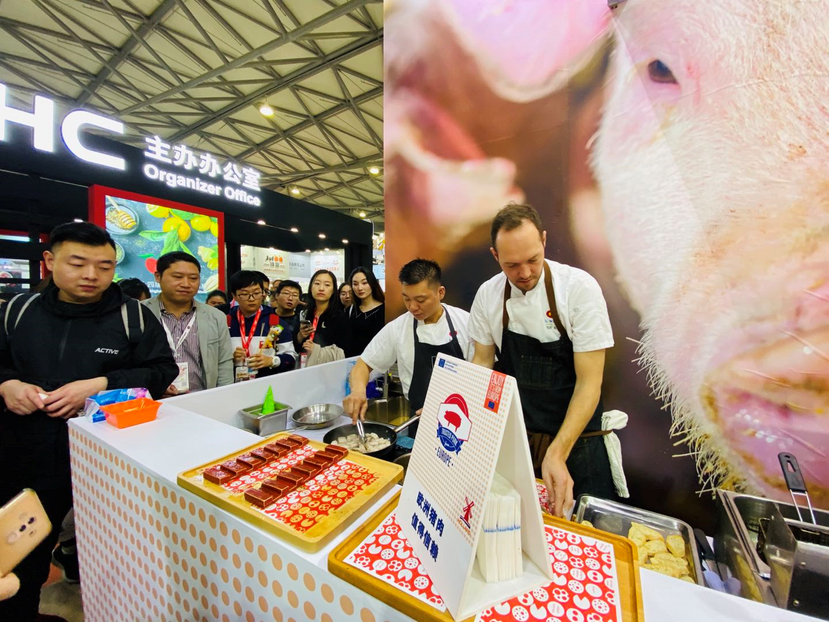 To show what Dutch companies have to offer, the members of the Trusted Pork initiative exploited a booth where they provided information about the quality standards of their pork, and information on their business practices, they also brought their product to the people. A Dutch chef and sous-chef were invited to perform a food tasting event. The chefs and organizer’s noticed that the Chinese people are gradually more open to different styles of meat preparation and cooking, creating a great attraction of people wanting to experience the mixed style cooking with good quality pork.

In addition to the onsite booth, FHC also organized a series of knowledge-sharing forums. Frans van Dongen, representative of COV, was invited to deliver a presentation, where he shared his view on characteristics of securing food safety both in the Netherlands as well in other European member states.