From 10-12 April, the Dutch embassy trade mission visited Qingdao and Yantai in Shandong province, the 3rd economic power and leading vegetable grower and exporter in China. As part of the mission, a Sino-Dutch Modern Agriculture (Greenhouse) Technology Seminar was organized in Qingdao and Yantai respectively. Approximately 150 people from local growers, researchers, and government officials participated in these two events.

The trade mission was organized by the Netherlands embassy in Beijing and the Netherlands Business Support Office (NBSO) in Qingdao and Jinan. NBSO Qingdao and Jinan, as regional office of Dutch government trade organizations, maintains strong relations with local Chinese government and companies. Together with the participation of Mr. Andre Driessen, the chargé d'affaires of the embassy, an intensive program was carried out which attracted a lot of Chinese companies interested in using advanced Dutch technology, seeds and knowledge offered by companies such as Ridder HortiMaX, Rijk Zwaan, Wageningen UR, Metazet, Hoogendoorn, Van Iperen, and Dalsem. 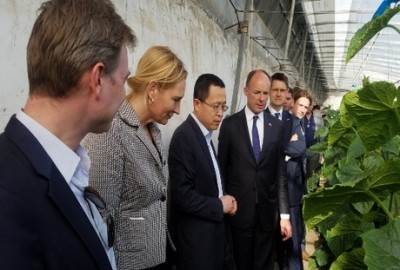 According to Fulco Wijdooge, general manager of Ridder HortiMaX China, “it was one of the best trade missions I have participated in; well organized by the Chinese authorities of Qingdao and Yantai, NBSO and the Dutch embassy, featuring interesting meetings with Chinese growers and investors who had straightforward requests such as building a 50 ha greenhouse project as well as how to upgrade blueberry production facilities. Next week we will attend the Shouguang vegetable expo and meet some of them again for further discussions.”

Also the China office and testing area of renowned Dutch seed company Rijk Zwaan was visited. Mr. Sun Zhongkui, the general manager, gave a presentation which showed the development of their activities in the last 18 years. Rijk Zwaan has built up a very good brand reputation in the Chinese market and is one of the pearls of Dutch horticulture in China. Business is booming and they will relocate their activities to a new location in Qingdao and set up an even larger company and testing base. “There is tremendous activity now in the horticulture sector with large scale projects planned, whereas the growth in other sectors has slowed down in China. After Chinese New Year (end of January 2017) it is usually quiet for some months, but at this moment we already received many orders and are working on a number of new large scale projects such as the 7 ha Dongying greenhouse project.” Mr. Sun mentioned in the meeting.

Some facts on Shangdong:

This week (from 20 April), the 18th China (Shouguang) International Vegetable Sci-Tech Fair will be held in which a Dutch pavilion will be organized with over 20 horticultural companies from the Netherlands. NBSO Jinan will also be present to support Dutch companies in doing business.

NBSO Jinan and Qingdao can be reached through following contact persons in case you have questions or need assistance.