Creating new and modern gardens gave access to more export markets, but the sector remains far below its potential

Cherries are grown in 68 countries worldwide, with Bulgaria ranked 15th in terms of production.  Cherries are among the few types of fruit that Bulgaria can export competitively as fresh production at the international markets, although exports from Bulgaria are currently rather symbolic. The benefits that can be used are the favourable climate and the market window – towards the countries of the Northwest of us which are big consumers and towards Turkey – the third largest exporter in the world. The main competitor of the Bulgarian cherries are the Greek cherries. Our country still has a recognizable name that has even been reviving in recent years.

Areas of cherries stabilize and grow over the last 4-5 years, driven by good yield opportunities. Good market prospects also draw the first analysis of the sector, made by a non-governmental organization - “Prospects for Fruit and Vegetables in Bulgaria”, published in 2012.[1]

Characteristic of the investments in recent years is that they are in larger gardens, modern varieties and more intensive technologies. Single companies have invested in cooling, calibration and pre-fabrication in time, and have managed to set foot on some of the most solvent markets in Western Europe – the UK and Germany.

These tendencies, unfortunately, cannot yet prevail over the history of the sector over the past 20 years – fragmentation of plantations, heterogeneous and outdated variety, lack of pre-production and inability to load and export in large quantities of homogeneous production. This is reflected in the industry's results. With an annual production of between 35 and 50,000 tonnes, over 50% of the crop goes to processing (mainly for pulp – temporarily preserved cherries, which are subsequently made of cocktail cherries), because it does not have the qualitative characteristics needed to reach the market for fresh consumption. Slightly over 40% is marketed in local network – markets, stores and retail chains, between 2.5-3.5% of the harvest is exported every year for fresh consumption and very small quantities are consumed for own consumption.

This also determines the price structure of the market, roughly as follows (average prices vary in separate years, depending on the quality and quantity of the harvest):

The average yields for the country are relatively low – 400-450 kg/ha in the last two years, but this reflects the results of still dominating areas with outdated morally and materially gardens. In the younger and modern, well-groomed crops, the yields range from 800 kg to 1.5 tonnes per hectare. Theoretically yields may be higher than the current best results if the most advanced, intensive technologies are used. It is also noteworthy that in the 1980s, Bulgaria produced 70-80 thousand tons of cherries per year, so unrealized potential is also one that puts our country in the top 10 in the world.

The road to success has already been drawn, and it is precisely the good examples of new investments in the country that have managed to find a favourable realization abroad. Two other factors, although of varying weight, contribute to the more favourable prospectives for the sector. We rank them as follows:

Three are the main limiting factors for the development of intensive cherry-production, oriented towards a premium export market:

The question is how to develop the sector despite these limiting factors?

We believe the successful future of the sector lies in the cooperation between the single large producers and exporters and small, family investors. The former have already built up the necessary base and have paved the way for the international market, but they can not export large volumes of homogeneous production, need complementary quantities and supply security. We will call them Center for convenience.

Small family investors can bear the financial burden of creating a hectare of 1-2 hectares of intensive planting based on market requirements (variety stock, breeding) and serving them with family labour, providing a fairly decent additional income against work from 1-2 months of the year. However, they must be in long-term relationship with the Center to provide quality seedlings of its variety, know-how and cultivation techniques by committing to buy the produce. Such relations in our country are unknown and distrust, but the truth is that in the changing environment of production and market requirements, without cooperation among producers, a large part of them are doomed to a slow liquidation. 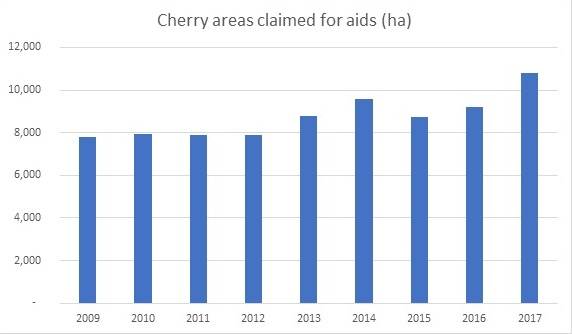