The new US retaliatory tariffs have four clear targets:  Germany, France, the UK and Spain. One billion of Spain’s agrifood exports are at stake. 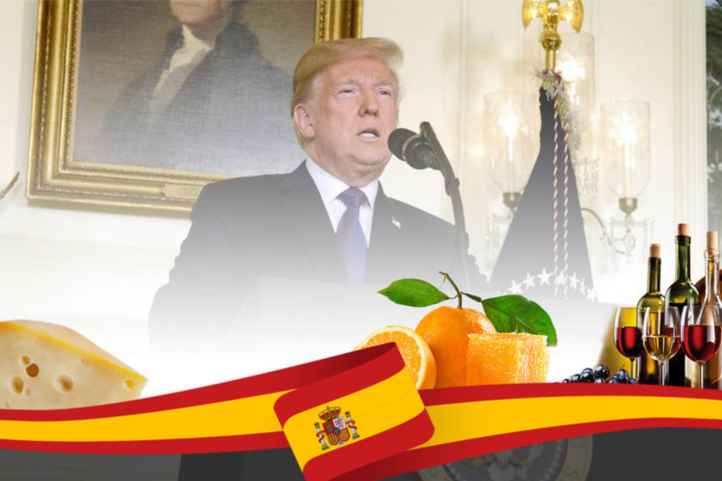 The above mentioned are the countries which provided subsidies to the European plane maker Airbus giving rise to the WTO verdict legitimating Donald Trump’s decision to impose additional 25% tariffs on certain European agricultural imports.

The Spanish sector is alarmed

Mauricio Quevedo, Directing Manager of the sectorial organization Fiab, warns on “the negative effect this scenario would have on Spanish food and drink exports”, although the list of products is still provisional (Fig. 1). 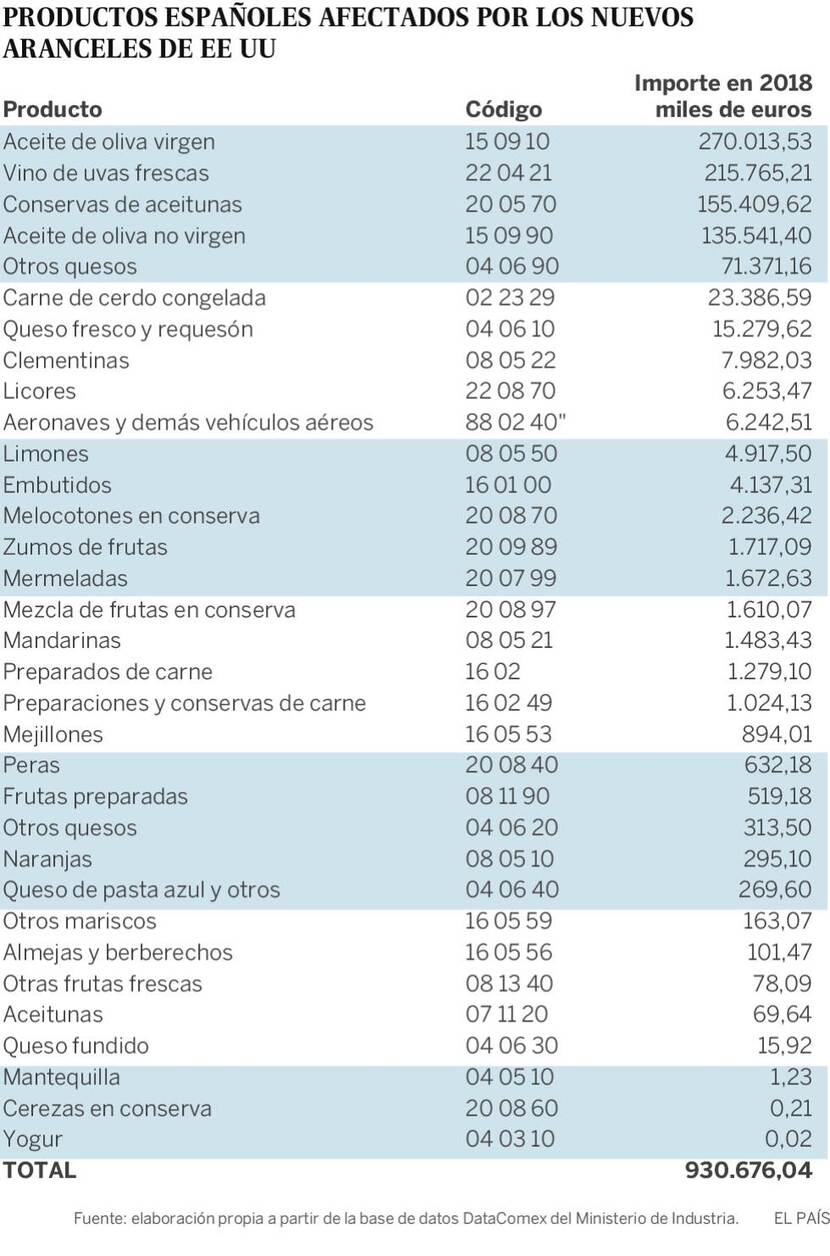 Fig. 1. Spanish agricultural products affected by the US tariff

“This tariff policy, whose sole objective is to cause the greatest possible economic and political damage to Europe, locks our industry into a commercial war with the consequence loss of competitiveness for Spanish companies in relation to other international operators and its negative impact on national employment”, Quevedo adds.

With €1.73 billion exported in 2018, the US is currently the first destination market for Spanish food and beverage export after the EU. In the last two years, this export grew by 14%; it is therefore “a strategic market for the national industry”, the Fiab’s manager points out.

If this retaliatory measure is finally applied unchanged, its impact on Spanish exports would reach about €1 billion, as explained by the Secretary of State for Trade. In addition, she specified that this impact would be more noticeable in regions such as Andalucía.

In the first seven months of 2019, Spanish companies exported agricultural products to the US worth €933 million, 11.6% more than in the same period last year. 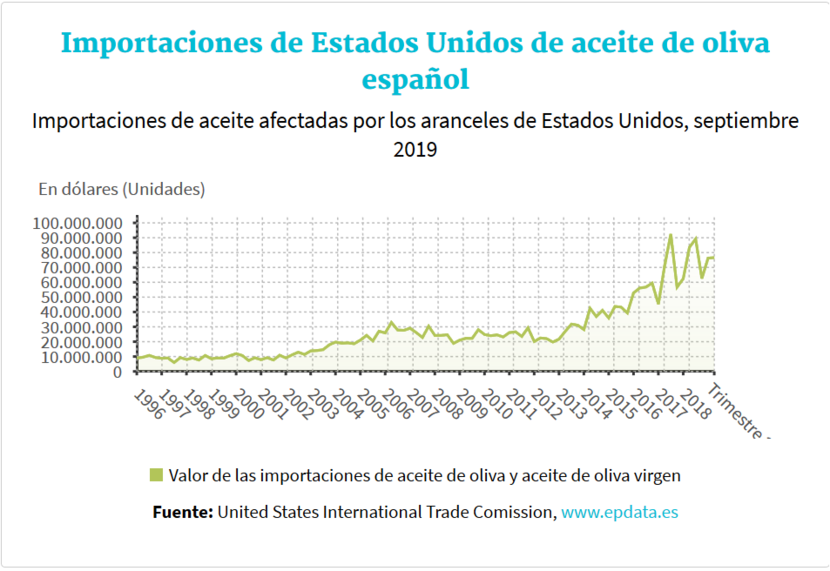 It would be the sector most affected, according to the sectorial organization Asoliva, since “the rest of the countries competing with Spain within the EU won’t have this new tariff”.

Wine. Spanish exports to the US were €315 million, with a slight increase of 1.5% over the previous year, when the highest value of the last five years was exported (Fig. 3). 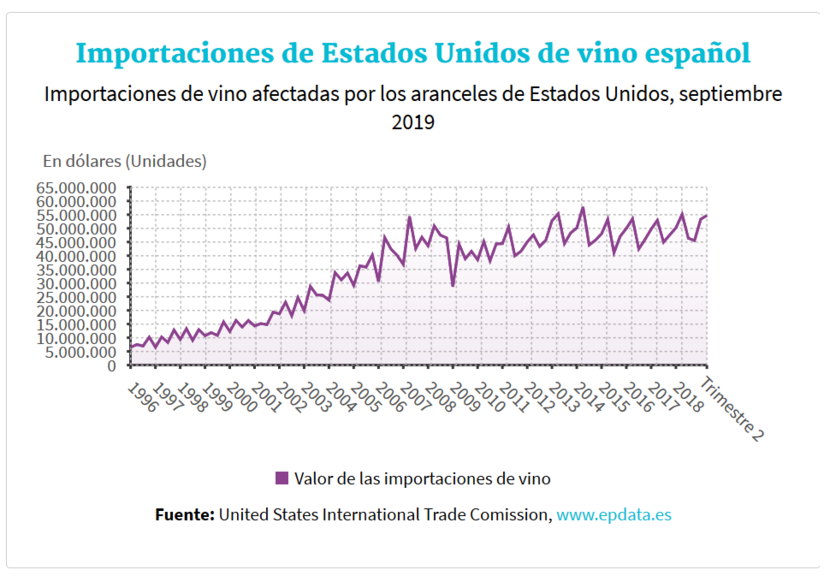 Fig. 3. US imports of Spanish wine

Olives. Table olive, with €155.4 million in exports, are already affected by the 35% tariffs that the US Administration imposed on black olives “to please Californian producers”.

According to the sectorial organization Asemesa, since the entry into force of that tariff, the Spanihs sector has lost 50% of black olive exports to the US. However, with regard to the new one, the organization is relatively calm because “Spain is the only country capable of satisfying the demand of American customers for green olives. There are no countries which can replace us”.

Dairy sector. Losses, mostly from cheese exports, could reach €87 million, according to the sectorial organization Fenil. The US is the main destination for Spanish cheese exports, having grown by more than 50% in the last five years.

Other foodstuffs. Products such as fruit and vegetables (€87 million in exports to the US in 2018), together with some types of liqueurs (€6.2 million) would be affected as well.

In the case of pork, whose exports to the US only account for 1% of total pig meat exports, the impact of the new tariffs would not be very significant, and the same regarding fish products, whose export value to the US does not exceed €400,000 per year.

EAE Business School Professor Ruiz Ezpeleta says: “this will be a problem but not a drama”. “We will have to see whether Trump does not finally back off, as happened with the automotive sector”.

The expert adds that “if these new tariffs are implemented, companies will have several options: continue as before, even if they lose part of their sales; look for alternative markets, or triangulate to reach the US through third countries with better conditions, such as for example, Canada”.

On Thursday 10, the Secretary of State for the European Union summoned the US Ambassador in order to convey his frontal rejection of the new tariffs.

Luis Planas, Minister of Agriculture, Fisheries and Food, said, “There is room for negotiation so that the list of products is totally or partially cancelled. And I hope that this conflict does not materialize”. Although he recalled, “if someone initiates a conflict he should be responsible for it”.