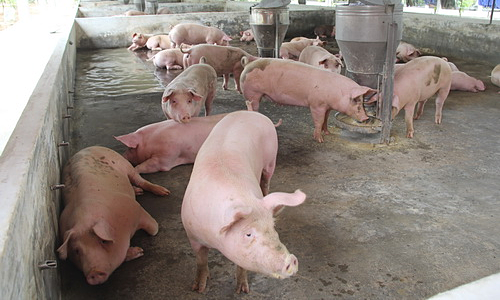 The viral disease that infects all pig species through bodily fluids such as blood and mucus and causes hemorrhagic fever has been found at two farms in Trang Bom and Nhon Trach districts close to HCMC.

Local authorities said the area within a radius of three kilometers (less than two miles) from the two farms are threatened.

They have quarantined the infected areas, culled sick pigs and temporarily shut down nearby slaughterhouses.

Dong Nai has the largest number of pigs in Vietnam, more than 2.5 million, of which 75 percent are raised in large farms and the rest in households, according to the province's Livestock Association.

The province is the first locality in southern Vietnam reported to be hit by African swine fever, which has been reported in pig farms in more than 20 cities and provinces in the northern and central regions this year. Over 85,000 pigs have been culled.

But several northern provinces and Hanoi have reported they are free of African swine fever after there were no new cases of pigs dying for 30 days as required under Vietnamese regulations.

Some 70 percent of meat products in Vietnam are from pigs, with over 10,000 farms and 2.5 million households raising the animal for food.

There is no cure for African swine fever though humans are not affected by it.

Twenty countries and territories have reported outbreaks since 2017 and over one million pigs have been put down, according to the World Organization for Animal Health. Vietnam is the third country in Asia to be hit after China and Mongolia.

In Vietnam, it was first discovered in the northern province of Hung Yen on February 1 before it quickly spread to other provinces and municipalities across the northern and central regions.